If reading Shakespeare for your English class wasn’t the best experience ever, seeing Chamber Cymbeline can restore your faith in Will’s ability to entertain (and not torture). Unlike many English teachers, Seattle Shakespeare Company tries and succeeds at making this Shakespearean play a pleasure to watch. 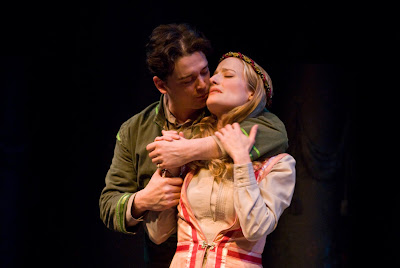 
Though Cymbeline was written hundreds of years ago, the play is pretty relatable, if you forget the high-strung damsel in distress, crazy love story, tangled situations, attempted incest, lost princes, and the infamous I’ll-only-kill-you-for-pretend poison that pops up in so many of Shakespeare’s other plays. This play, one of William Shakespeare’s last, carries so many common Shakespearean themes and motifs you might think he cut and pasted pieces from all his previous plays to formulate the story of Cymbeline.

Like many things, Chamber Cymbeline is initially a bit hard to get into, but definitely worth the stay. The language is a bit of a barrier at first. Fortunately, Seattle Shakespeare Company does a wonderful job of obliterating that barrier by bringing the play not only to life, but to the twentieth century. When I laughed while watching the play, I was laughing at the hilarious jokes and actors, not the peculiarity of Old English. The only other difficulty I had was with the indistinct character changes. It took me a while to realize actors were playing multiple parts, so the storyline was a Rosetta Stone at first. Once I straightened things out, however, the rest of Cymbeline was smooth sailing. 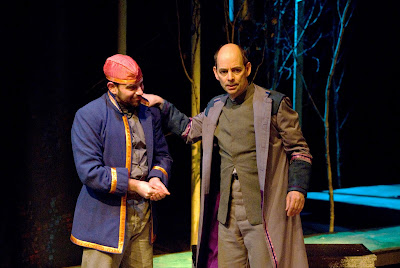 
I’ve never known plays to be particularly artsy, but there are a few particular scenes that really aesthetically impressed me. In those scenes, the lighting, music, sets, and actors are in some sort of perfect harmony, one which completely captivates the audience and brings attention to the poetry of Shakespeare’s beautiful lines. So give Chamber Cymbeline a chance. It may entertain and enlighten you in a way no classroom setting can.