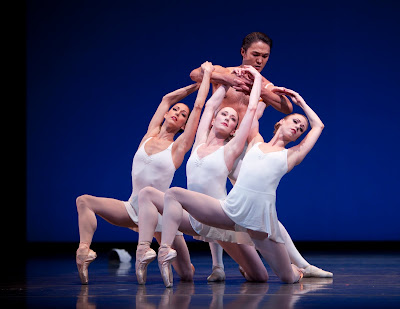 Photo by Angela Sterling
Synesthesia can be defined as a condition in which one stimulus evokes the sensation of another. This generally occurs as a response to the hearing of a sound or of music giving way to a visualization of a particular color. George Balanchine once said he envisioned a white pristine color in response to hearing Igor Stravinski’s musical piece for his choreography of Apollo in 1928.

Balanchine is regarded a notorious contemporary choreographer who influenced the growth of dance in America. Igor Stravinsky, one of the greatest musical innovators of his age, also contributed his visionary style to the creation and development of Apollo. Together, they created a powerful and delightful celebration of the search for enlightenment. 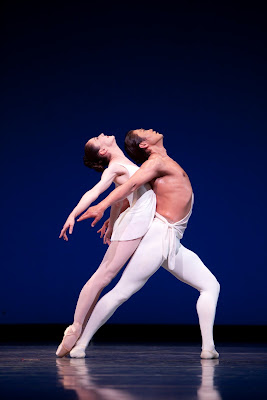 Photo by Angela Sterling
Eighty-four years later, Apollo continues to shine within that “pristine white” aura. Its narrative, syncopated pointe work, shuffles, hip action, synchronized movements, and white and blue contrasting lighting enhance the pure, bold, clear colors envisioned by Balanchine. On stage Apollo, the Greek God of music, is born and begins to develop and grow his talent. He encounters three important muses, Calliope (poetry and rhythm), Polyhymnia (mime) and Terpsichore (dance). As the muses engage in a harmonious dance across the stage, Apollo observes them invent their art, one by one, each unraveling and opening to the excellence of celebrating the power of the divine, of light, and of harmony. 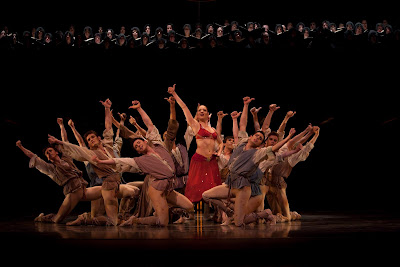 Photo by Angela Sterling
Carmina Burana, based on poems from 11th and 12th century Germany, depicts the powerful and epic musical composition of Carl Orff. In the year 1934, Orff selected 24 poems and structured a libretto in which he covered topics such as fortune and wealth, life, pleasures, drinking, gluttony, gambling, and lust. On stage, these feelings and emotions are represented in a huge golden wheel of fortune that symbolizes both power and the idea of opposites: day versus night, death versus life, and hunger versus gluttony, among others. Throughout the show we see the wheel turn from one point to another, creating a powerful statement of cycles, of journey, and of perspectives. 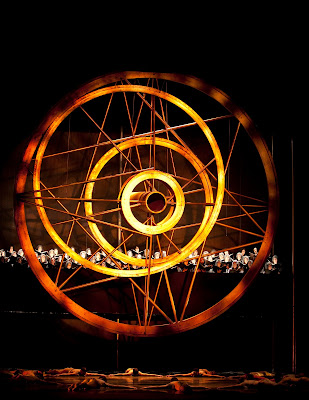 Photo by Angela Sterling
The wheel also serves as a division between the divine realm and the earthly one. Centrally located, it creates a line between the corporeal realm in which the dancers perform, experiencing pain, joy, lust, love etc., and a higher realm, exemplified by the choir that powerfully sings, communicating the message of passion and intention. In combination with the magnificent choreography of Kent Stowell, who was the Artistic Director of Pacific Northwest Ballet from 1977-2005, Carmina Burana engages the audience from the first moment. As soon as the first notes of “Fortuna” are played by the orchestra and the first words from the choir are sung, it is difficult to take one’s eyes away from the stage. The performance evolves into an engaging spectacle that showcases Orff’s concept Theatrum Mundi in which speech/dialogue, movement and music are combined. The powerful solo performances, the movements of the corps de ballet, and the commanding music all energize the atmosphere.

Opera singers establish a dialogue between dancers, choir, and orchestra. A tenor sings in falsetto tones, and we perceive his struggle, ecstasy, and intensity of intention. Although the combination of choral accompaniment, dance, and music is powerful, one drawback lies in the fact that one may not able to take it all in at once. Because of the Theatrum Mundi lens, we are guided to observe and comprehend the performance in an interdisciplinary way. However to isolate one element would most likely create an unbalanced tempo and rhythm. For example, there is a moment where the choir has an important part in leading the piece by itself, completely a capella, however this is counterbalanced by the response from opera singers, who establish a beautiful, harmonic, and melodic dialogue. 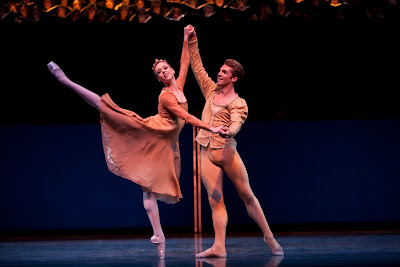 Photo by Angela Sterling
Carmina Burana’s lighting and epic soundtrack, its character’s struggle, its passion and powerful performances are some of the elements that enable this show to continue to be as successful as it is. It is a valuable piece, able to communicate and connect with to audiences of all ages through human emotions and experiences: anger, lust, joy, love, and pain. Both Apollo and Carmina Burana showcase intense emotions, rhythm, and energy. Through a combination of visual elements, music, and dance, they enhance our understanding of surrendering to something bigger than ourselves and guide us through the journey of encountering the light.