Teen Tix's Teeny Awards are presented every Spring by the Teen Steering Committee based on member voting. The awards aim to empower young audiences, to reward youth-friendly programming choices, and to acknowledge those organizations where young audience members feel particularly welcomed and valued. 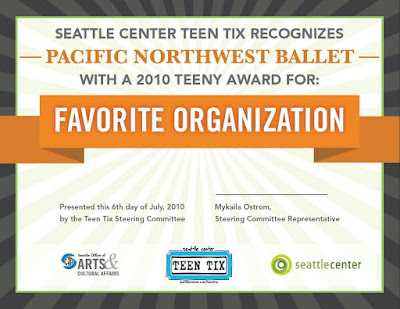 Our beautiful certificate, designed by Brian Naubert
This year, we surprised all of the winning organizations with singing telegrams. Our amazing Teeny Awards Delivery Squad - Elsa, Katy, and Mac - sang, danced, and spread joy all day long. It was (how shall we say?) completely off the hook. Watch!

Thanks to everyone who voted, thanks to our incredible Delivery Squad, and thanks to all of our participating organizations for making Seattle such a great place to be an arts-loving teenager. WE LOVE YOU! See you next year.

The Phoenix Award: Rising From the Ashes: Taproot Theatre Company