So, here's the question: has texting become so integral to teens' lives that the fact that you can't text while you're watching a play or dance performance or even a movie deters you from wanting to do those things? 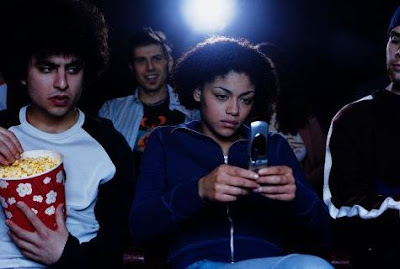 Today on Slog, Paul Constant suggests that maybe some accommodation could be made for people who can't stand to go an hour and half text-free: maybe movie theaters could designate the last two rows as "text-friendly," thereby providing texters with a place where they won't feel deprived and the people around them won't feel annoyed by their little glowing screens.

Last year, during their run of Speech & Debate, Seattle Rep designated a couple of rows in the balcony for tweeting for a couple of performances. It's not hard to imagine (okay, it's a little bit hard, but since you're all young and your imaginations are therefore hopefully still in working order, I'm sure you can get there) theaters and music halls adopting a similar system as audiences grow younger and - for better or worse - less capable (or willing) to be separated from their technology.

So, what you think? Would you be in support of arts organizations making space for mid-show texting? Be honest - have you ever been deterred from going to see something because you knew you wouldn't be able to text for a couple of hours? Or do you think that texting during shows is a social scourge that ought to remain forever verboten? Take the poll (up there on the right)!