Review of From the Back of the Room at Northwest Film Forum by Olivia M. 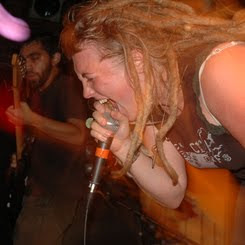 Thinking of the punk music scene, instantly, spikes, crazy hair colors, and lots of screaming come to mind. While occasionally that is exactly the case, from watching From the Back of the Room it is now clear just how many different kinds of punk, hardcore, fashion punk, and DIY there really are. Some people may know exactly what is referenced when talking about Riot Grrrl, but many, present company included, had never heard of it. Essentially, it was a time in the 1990’s where the female voice in DIY punk was finally, and loudly, heard. Before and after that time, the female role in that scene is being largely forgotten or ignored, and this documentary explores how it feels to be in such a male dominated sub-culture and how some are trying to change it.

This documentary interviews around thirty-five women whose roles range from band member, show promoter, roadie and more, who are all for the most part articulate, intelligent and determined. None of them try to be the ultimate example of women in punk, and it seems they all just want to have equality. One woman is a great example of this: Chris Boarts-Larson of the band Slugs and Lettuce. Running a zine--which she started at the age of fifteen in the height of scene--she experienced a lot of surprise when readers learned she was a woman (she went as Chris instead of Christine.) The reasonable annoyance, and pretty much the entirety of the film is summed up with her quote: “Yes, I’m a girl, damn it, acknowledge it, respect it, and then don’t treat me any different.” It’s a fight to not have the accomplishment of finding a following in the scene, which is hard regardless of sex or gender, simply attributed to their gender, and not to their prowess, creativity and raw power.

With such a range of women interviewed about so many topics (motherhood, making a name for themselves in the scene, sexuality and sexism,) it seems likely that even those more educated in punk will find themselves seeing a whole new side to those integral to the movement. Personally, never before understanding the draw of the genre, I find this extremely useful as an introductory breakdown to some of the energy and ideals of this kind of music and the community it has around it. Seattle Public Library has a few Bikini Kill cd’s and a book of the feminism of the Riot Grrrl movement waiting for me right now, and I still don’t know if Riot Grrrl is pronounced as if the “girl” contains a growl, but I’m on a mission to find out.