Review of Sunlight at ArtsWest by Renee A.

If you are looking for a morally provoking play that will truly cause you to think, then I urge you to go see the Seattle premiere of Sunlight playing March 10th through April 3rd 2010 at ArtsWest Playhouse and Gallery. 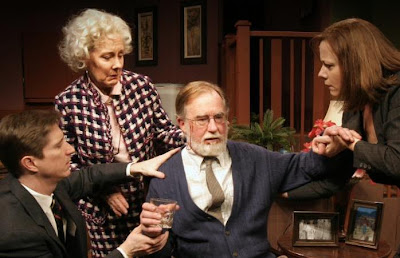 John Ulman, Karen Nelsen, John Wray, and Peggy Gannon in Sunlight at ArtsWest. Photo by Matt Durham.
This modernly set play focuses in on four people in the midst of a crisis. Matthew Gibbon (John Wray), a college president whose political antics have him well known all over campus, has recently been caught destructing and debauching the office of the college Dean. As a result, Gibbon’s daughter Charlotte, played by Peggy Gannon, finds herself in a tricky situation as she happens to be married to the Dean (John Ulman) and has been caught in the crossfire. Rounding out the cast, and providing this intense play with some needed comic relief, is Gibbon’s assistant, fondly called "Mimi" and played by Karen Nelsen. As the characters deal with the repercussions of Gibbon’s actions and the conflicts it has caused on campus, the audience is faced with the reality that it is never as simple as categorizing everyone as either good or bad, but that there is a little bit of both in each of us.

It was very apparent as I watched this play that each actor had put in a tremendous amount of work into defining and shaping their character. What I loved about this ensemble piece was that nobody stood out individually, that each actor played their part extremely well and at the same time supported the other actors too. Having said that though, I do want to say that if you needed just one reason to go see this play, it would be Karen Nelsen whose performance of her character Mimi was flawless and a delight to watch.

All in all, I felt the drive down to ArtsWest was really worth it. The theatre is located in a great area of West Seattle right by Easy Street Records and across the street from Cupcake Royale (yes I did manage to grab a cupcake right before the show). So if you are in the mood for some thought provoking themes and great acting, don’t miss this performance. It’s been pretty gray outside lately, so don’t miss this opportunity to go get some Sunlight, playing now at ArtsWest.