Review of Wedding Belles at Taproot Theatre by Emma Me.

Once again, Taproot Theatre fails to disappoint, this time with a vivid and comedic performance about life in the southern United States during World War II.Wedding Belles takes place over the course of a day in the life of four older women in Eufala Springs, Texas, 1942. As many women of their time, these four close friends are very involved with the war. By baking for soldiers, donating supplies such as newspaper and aluminum to be recycled in times of hardship, and raising money through town functions, the ladies do their part to help their country during wartime. Filled with laughs, accurate costumes, and an outstanding set, Wedding Belles is a return to the past for many who were alive in the mid-1900s. 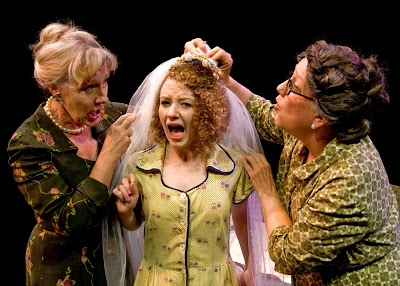 Karen Nelsen, Charissa Adams and Kim Morris
Photo by Erik Stuhaug
As the show begins, the day starts off as an ordinary one, with three of the ladies searching for the other, Laura Lee, at her house. The three are introduced as Glendine, Bobrita, and Violet, the last two being sisters. While they gripe and present their problems in strong southern accents, Laura Lee walks in with a surprise. Trailing behind her is a young teenage girl named Ima Jean whom she found alone at the bus station. It is quickly discovered that this young, meek girl is to be married to her sweetheart, an infantryman. After she meets him at the bus station later in the day, the two will be wed at the courthouse. Upon hearing the story, the enthusiastic and independent women quickly take Ima Jean under their collective wing and begin to plan a grand wedding for her.

Setting the scene and dominating an entire wall is the façade of the back of Laura Lee’s house, which places the bulk of the action in her backyard. A porch, table, and flowers all become incredibly versatile props, seamlessly integrating themselves into the characters’ actions. The telephone ringing constantly in the window completes the setting, becoming a vital information hotline between the women and the rest of the small town. However, the incredible scenery is nothing without the impressive acting done by everyone involved. Each one of the five southern ladies has a bold and unique nature, and all of their unique personalities are definitely done justice in this show. 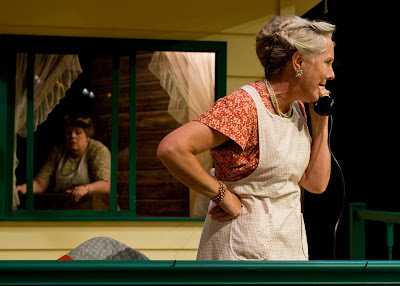 Karen Nelsen, front, with Gretchen Douma, back
Photo by Erik Stuhaug
After the lights dim and country music filters throughout the room, the audience truly comes to know the characters. It is easy to fall in love with young Ima Jean, waiting for her beloved. The four ladies with their sweet, caring personalities and different, relatable struggles are the epitome of the average women of the time period. The bonds formed by the promise of a wedding and the sense of urgency only brought about by wartime become both enjoyable and comical when experienced through Wedding Belles.

Going to Taproot Theatre for the first time? Write us a note about it, and you might win a fabulous prize pack including tons of tickets and memberships to local arts venues. It's the Teen Tix (he)ARTSCrush Adventure Quest! All you have to do is go to this form, write a note (150 words or less) about your experience at a new-to-you arts venue, and hit "Submit." Boom. You're entered to win. Do it over and over and over again and you might get crowned Seattle's Bravest Young Arts-Goer TM. More details here. Good luck!