Review of The Merry Wives of Windsor at Seattle Shakespeare Company by Emma Me. 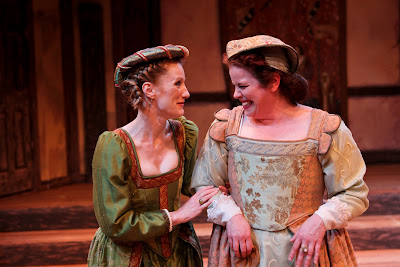 Candace Vance as Mistress Ford and Leslie Law as Mistress Page
Photo by John Ulman
When two high-class English wives are left alone together, how much mischief can they manage to get themselves into? Mistress Ford and Mistress Page discover several sources of entertainment in Seattle Shakespeare Company’s production of The Merry Wives of Windsor. Filled with light-hearted trickery, clever acting, and stunning visual effects, this theater production embodies the true spirit of a Shakespearean comedy.

While William Shakespeare is most widely recognized for his tragedies such as Romeo and Juliet and Hamlet, his comedies are equally memorable and entertaining. The recurring character of Sir John Falstaff, a plump old knight determined to acquire money, is of the most beloved Shakespearean characters in terms of comedic value. Falstaff once again becomes the object of hilarity in The Merry Wives of Windsor when he decides to simultaneously woo both Mistress Page and Mistress Ford, two wealthy, married women that supposedly take charge of their husbands’ finances. Confident in his charm, wit, and good looks, Falstaff attempts to lure the two away from their husbands in order to gain money. However, he is unaware that the women know of his plot and have plans of their own involving revenge and humiliation. 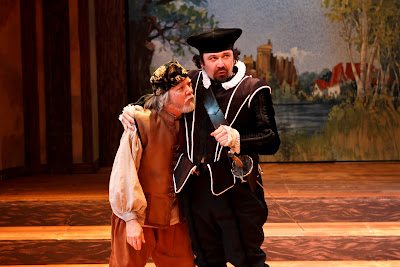 Sean Patrick Taylor as Host and Gavin Cummins as Doctor Caius
Photo by John Ulman
Several harmless pranks are carried out at Falstaff’s expense involving a laundry basket and a rather large dress. As the two women entertain themselves, they must dodge several obstacles such as the suspicion of Falstaff and the unnecessary jealousy of their husbands. Mistress Ford’s husband fears for the future of his marriage so much that he visits Falstaff in disguise and hears of the entire plan. Unfortunately, Master Ford only motivates Falstaff to pursue Mistress Ford further, creating new complications for the wives.

As all characters struggle to arrive at a happy ending, their unique personality traits and accents come through, captured marvelously by the actors. The costumes and props perfectly fit the time period, and enhance every scene. Class distinctions become obvious through clothing, especially when the voluminous gowns of the wives are placed side by side with Falstaff’s worn shirt, vest, and boots. The settings also undergo a dramatic shifts between each scene, for a series of backgrounds rotate into place, easily changing from the countryside near a large estate to the inside of the Garter Inn, a pub inhabited by peasants. 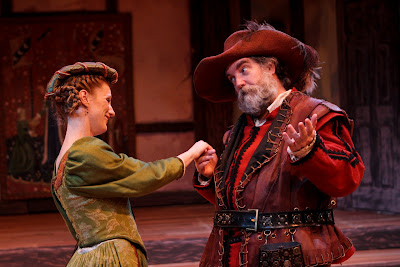 Candace Vance as Mistress Ford and John Patrick Lowrie as Sir John Falstaff
Photo by John Ulman
Similar to Shakespeare’s other works, many subplots which revolve around the central theme appear as the story develops. From the beginning, Mistress Page struggles to find a suitable candidate for her daughter, Anne, to wed. As multiple men present themselves, each is more peculiar than the last. The true value of this subplot is the manner in which each suitor embraces his role and gives it a unique personality. One man, a French doctor who is ironically prone to injury, divides his time between pursuing Anne and honing his nonexistent sword fighting skills for revenge on a man who tricked him.

The combination of entertaining pranks, abundant secrecy, and seamless choreography results in a stunning production of a Shakespearean comedy. Small touches of modern humor throughout the play are integrated into the script by the Seattle Shakespeare Company so as to enhance the original work. Falstaff’s misfortune becomes a benefit for everyone as the noble wives of Windsor plot to remain merry.

The Merry Wives of Windsor
Through May 15th
Seattle Shakespeare Company