Review of Amarillo at On the Boards by Melissa C. 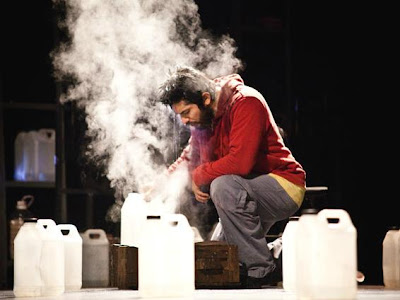 Beautiful, creative, and moving. These are the words I use to describe Amarillo. The use of sand, water, clothing, cigarettes, point of view, multi-media, dance, color, light, movement, and voice were nothing short of perfection.

In Amarillo, the tale of the illegal immigrant making his way to the U.S. and back is told almost entirely in Spanish with English translations projected on the back wall along with live-streaming and prerecorded video. That is not all that the back wall is used for. The actors jump at, climb up, talk to, and dance with this large, symbolic piece of concrete. I would like to think that I know why they interacted with the wall in this way, but every moment in this piece, every prop they used, and every line they said could be broken down and analyzed for meaning. In the end you didn’t need to know exactly what was going on for the emotion to strike home.

Not only is it an incredibly well done piece, but it holds a message that is really important for people to hear – especially young people. Our country needs to change its perspective on illegal immigration and that starts with the us. This piece made me see that we need to understand the plight of the immigrant – not make them the enemy. We need to work together to find solutions – not decide that the only solution is elimination. 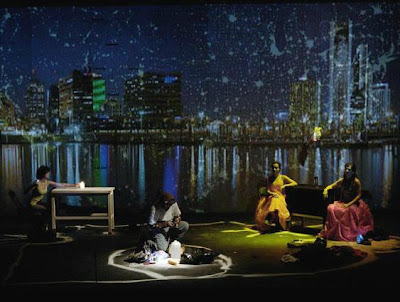 However, even with this awakening, I still have some questions. I’ll admit that, with my very sheltered world view, I cannot possibly comprehend what would compel someone to illegally cross the Mexican/American border. I don’t understand how the promise of a country that has massive unemployment, is hugely discriminatory against Latinos, and does not try to make life easy for immigrants could outweigh the sorrow of leaving your home and your family and the risk of death when crossing the border. I also don’t understand what I can do to help. Obviously I don’t want these people dying out there – people who are willing to do whatever it takes to get the privileges that I was born with. But I don’t see how I can change anything. Is the idea that our border should just be open and any one should be allowed in? Or was the idea purely that we should stop looking at immigrant control as a political issue or an economic issue and start looking at it as a human issue?

I wish that they had made it through the desert. That they had brought it closer to home, and addressed an issue that I could help correct. Because I feel that there are things that can be done right here in are communities. Often that the border never goes away in America today. The talk back after the show was a perfect example of the never-disappearing wall. There was no proper translator onstage and only about half the audience spoke Spanish while all those being interviewed spoke little English. I sat back, interested, as I watched the attempts at communication breed frustration. Even in this situation, where we desperately want to hear each other and understand each other and communicate, it was extremely difficult. 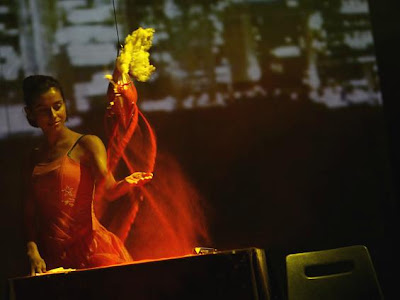 In a way the show was ironic because it brought down that wall. The many different forms of communication that were present made language an afterthought and the personality and emotion the actors brought to the stage made them sympathetic to someone from any culture.

Hermoso, creativo, y en movimiento. These are the words I should use to describe Amarillo.
Amarillo is closed
Next up at On the Boards: Kyle Loven's Loss Machine
December 5 - 10
Read more about Kyle Loven in his TeenTix Crush of the Month profile