A review of Plaid Tidings at ArtsWest by Shannon L.

The Plaids, a barbershop quartet, were killed when broadsided by a bus on the way to a show. They returned to earth just one more time in the show Forever Plaid… or did they? The Plaids are back at Arts West in Plaid Tidings, and I certainly hope it will be back for many more. These four men, plus a small orchestra, executes spot-on choreography, never waver off-pitch, and still manage to stay perfectly in-character as they blend Christmas tune after Christmas tune into a wildly entertaining show for the holidays. Musically directed by R.J. Tancioco, the harmonies are bitingly bright and pristinely in tune. 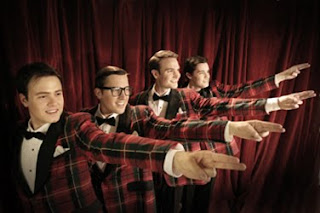 Of all the holiday shows out there, I don’t remember one that has made me cry from laughter (actual tears were streaming down my face), and again from an exquisitely simple and touching final line… until now. On their opening night, the cast of Arts West’s Plaid Tidings was, unfortunately, playing to a less-than-half-full house of elderly people, my mother, my younger brother, and me. We were the ones laughing the hardest. Even after a long Wednesday at school and two unbearable hours of mind-numbingly bland Driver’s Ed, this show is the perfect pick-me-up for any teenager. It has something for almost everyone; be ready to jump out of your seat and onto the stage, because these boys need help, and they’ll ask for it! The fact that it had little plot barely mattered. This sequel to the show Forever Plaid is filled with singing and precise barbershop-style songs, relatable characters, and hysterical comedy. Featuring John W. Bartley as the Charlie Brown-esque Smudge, Aaron C. Finley as leader-of-the-group Frankie, Ryan McCabe as baby brotherly Jinx, and Daniel Stoltenberg as endearingly quirky Sparky, this cast fails to disappoint. It would definitely be a mistake to miss this one.