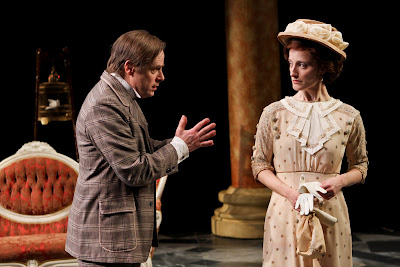 Mark Anders as Professor Higgins and Jennifer Lee Taylor as Eliza Doolittle
Photo by John Ulman
One of the potential biggest disappointments is seeing the adapted version of an original work. Everything seems wrong: all the characters in your head don’t look how they should, the plot is changed or worst of all: that one scene is missing. It seems logical that seeing adaptation, then original would be a step in the right direction. My first attempt at this was seeing George Bernard Shaw’s Pygmalion, after the musical adaptation My Fair Lady. Expecting some version of “The rain in Spain falls mainly on the plain,” was ill fated, but the rest of the play quickly makes up for this small disappointment.

Jennifer Lee Taylor may not talk about precipitation much but she does a pretty fantastic job of showing her transition as Eliza Doolittle from the cockney English accent gutter wench to a high society beauty, a self proclaimed “good girl.” She’s stuck as a lowly flower seller, lacking the ability to speak without often emitting hybrid squeal-screams that characterize her as unintelligent. Taylor has great chemistry with Mark Anders, who plays the awkward, phonetics-obsessed Professor Henry Higgins. 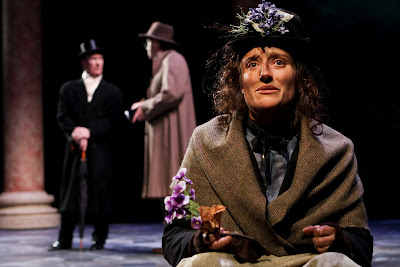 R. Hamilton Wright as Colonel Pickering, Mark Anders as Henry Higgins, and Jennifer Lee Taylor as Eliza Doolittle
Photo by John Ulman
Playing an equally important third fiddle is A. Bryan Humphrey, continually popping up with the necessary snarky remarks as both a narrator Shaw and as Eliza’s father, Alfred Doolittle. He is the role that truly connects play to audience, drawing us in with his wit.

As one who recoils from musicals, there may be some bias in my conclusion that the lack of singing and dancing in this play make it hugely better than the movie version seen years past. It’s understood that people of all ages can enjoy musicals, but lacking song this version seems to be more grown up, even a bit modernized, this tone reinforced with a digital background switching between collages for each setting.

The play is what I expected it to be: executed well by a whole slew of talented, solid actors, and yet I left wanting. In the namesake myth, Pygmalion is a sculptor who ends up marrying a statue who was the ultimate vision of perfection that he created, similar to Professor Higgins using his phonetic skill to make a perfect lady, minus the marriage. In a perfect world Eliza and the Professor would settle into high society as creator and creation, but that would probably require both characters to be more one-dimensional, a sacrifice that is most likely not worth it. Professor Higgins sings in the movie version that he has “grown accustomed to her face,” and I have done the same, now grown accustomed to a face that will never kiss its obviously destined husband. Some love stories just won’t work out, no matter how much of a “good girl” any of us are.