Review of Man of La Mancha at Taproot Theatre Company by Callan C.

Dreaming the impossible dream – that’s what Taproot Theatre’s performance of Man of La Mancha is all about. This award-winning musical about Miguel de Cervantes and his classic novel Don Quixote carries a classic message of hope, even in the most hopeless of situations. The story begins with Cervantes being thrown into prison by the Inquisition, where he meets a rough group of prisoners who are immediately suspicious of him. They put Cervantes on trial and charge him with being “an idealist, a bad poet, and an honest man.” Cervantes pleads guilty to all charges, but also persuades the other prisoners to let him defend himself in the form of a story – the story of an old man who calls himself Don Quixote. 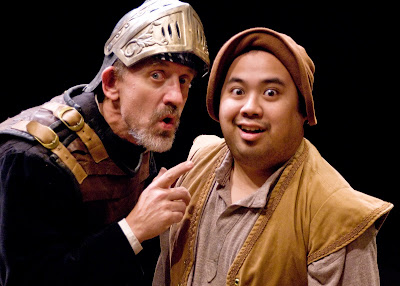 Jeff Berryman and Don Darryl Rivera. Photo by Erik Stuhaug.
I have to admit that before seeing Man of La Mancha, I knew very little about Miguel de Cervantes or the story of Don Quixote. However, I don’t think my ignorance took away from my enjoyment of the performance – in fact, I think it might have made it more enjoyable. I found Taproot Theatre’s intimate space to be well-suited for the story-telling aspect of the play, and the simple set and props seemed realistic, seeing as the story is supposed to take place in a prison. The actors, too, were excellent. Jeff Berryman, who portrayed Cervantes and his alter-ego Don Quixote, was passionate and charismatic in both roles. However, I must say that Don Darryl Rivera, who played Cervantes’ servant and Don Quixote’s sidekick Sancho Panza, was my favorite. He added some much-needed humor to this otherwise serious play, and I couldn’t stop myself from grinning when he sang “I Really Like Him” to explain why he so loyally serves his master Quixote. Though not all the actors were perfectly in pitch for the various musical numbers, the music (which included live guitar and percussion) was well-done overall.

The storyline itself is somewhat predictable towards the end, but I found it to be very touching and inspiring nevertheless. The ending and final song nearly brought tears to my eyes, as I believe it did for much of the audience. Though I have not actually read Don Quixote, as I said before, through my own research I believe that Man of La Mancha does stray somewhat from the original novel. In Man of La Mancha, the lines between reality and fantasy are blurred in more ways than one. Despite the fact that Don Quixote is really a crazy old man, you cannot help but find yourself on his side, enjoying his delusions of grandeur and glory. As the play ended I found myself wondering if it is better to be sane, living in a dismal reality, or to be insane, living in a fantasy world where one can truly dream. Perhaps it is as Cervantes says: “When life itself is lunatic, who knows where madness lies? Too much sanity may be madness.”