Review of Louder Than A Bomb at SIFF Cinema by Sanigiah Y.

Louder Than a Bomb- a pen, a page. Poetry- an expression of art; a necklace of words strung into magnificence. In Louder Than a Bomb, four Chicago teens prepare for the universe’s largest poetry slam, Louder Than a Bomb. But the movie is less about the actual competition, but the pathway to the competition. Each teen's troubles, emotions, thoughts, achievements are expressed onto a piece of paper, a practice, and an anthem to people everywhere. Jamar, Nova, Adam, and Nate, four teens who go through everyday, day to day, in every way, express their everything into powerful poems. But these teens don’t go through Louder Than a Bomb alone. Louder Than a Bomb emphasizes teamwork, passion, artistic expression, competition, and the significance of listening to the voice of the youth. Thanks to directors Greg Jacobs and Jon Siskel, the youth can be heard. 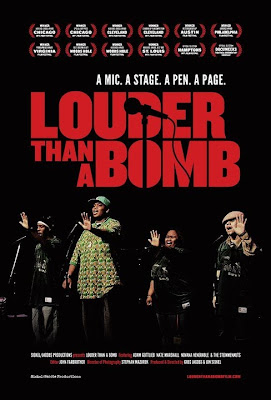 “Voices can be muffled, but never silenced. Use yours.”
- Jamar of the Steinmenauts
Jamar of the Steinmenauts (formally Steinmetz), is growing as a person and with his group. The Steinmenauts, who won Louder Than a Bomb in 2007, are intent in winning again. They lose focus, and on the way, almost their voice and value. They lose in the semi-finals, but gain the respect they have always wanted. One of their most notorious and collaborative group poems, Counting Graves, oozes out greatness. Unable to go to finals, they realize that “the point is not the point, the point is the poetry.” (Kevin Covall, founder of Louder Than a Bomb,)

Nova, of Oak Park, writes about her family and her poems pulls on heartstrings. She writes about all her deep thoughts and advances with Oak Park to the semi-finals. Her poem, Cody, talks about her brother who has a series of health problems. One cannot help but tear up a little and just delve into that emotional state she puts people in.

“Breathe now, poet, because one day, you will not breathe and the blood will not go to your brain and you will no longer say anything,” Adam says with so much power that his face turns red, starts to spit, breathes heavily. He admires the Steinmenauts and advances to finals, acknowledging them in group poem. He demonstrates good sportsmanship and the strong bond the poets have through Louder Than a Bomb.

Nate, who is experiencing his last year in Louder Than a Bomb, proudly leads his team. A rather quiet child and an outcast in his neighborhood, he recites poems loudly and fiercely. The ending poem and his individual poem is an anthem to the power of his voice which shakes the whole audience. He ends his poem by speaking about his past poems about sex, drugs, violence, and moms, and saying farewells to Louder Than a Bomb.

Louder Than a Bomb
SIFF Cinema
Through Thursday, May 12