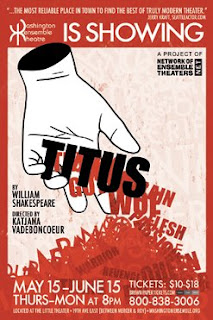 A Review of TITUS
at Washington Ensemble Theatre
by Tavis H.


In the world of theater there are few companies that are truly inspired by the art of the theater. We can almost always count on finding some form of entertainment or cultural enlightenment by seeing a professional production of Frost/Nixon, or Equus. We find the think of the drama as enlightening and peering into the psyche of a disturbed or disgraced character as titillating. However, few of these productions truly experiment or attempt to defy the norms of the theater, and those who do have a tendency to fail in bringing about a glorious revelation or epiphany that makes the theater experience more than entertaining, but cathartic. However, it is not to say that rare gems of theater do not exist, they do: one just has to find them. In the case of Washington Ensemble Theater’s extraordinary performance of TITUS, it found me.

On the evening that I watched the absolutely outstanding adaptation of Shakespeare’s Titus Andronicus, simply called TITUS, all was not going well. It started off in a restaurant I had been dying to try that ended up in a big disappointment in the form of mushy gnocchi, it then was followed by a long walk, sore feet, an espresso in my lap, thirty minutes of ironing my pants with an ice cube and a rag, and very low expectations for a theater company that I had never heard of, for a show that’s only redeeming quality is the amount of bloodshed that goes on. So as I marched into the Washington Ensemble Theater’s little black box theater, my low spirits silently mocked how this two hour long show with no intermission would probably end up being like most amateur theater: long, uninspired, and verse recited…incomprehensible. By the end of those two hours, my jaw was dropped, and my cheeks ran red with shame for being so prematurely judgmental.

Never before had I seen an avant garde production as tight and powerful in its stature. Every facet, every single scene, resonated an aesthetic beauty in all forms of the art of the stage. The actors, the lighting, the set design, the pure imagination struck a form of awe in me that I have rarely had the opportunity to experience. For example, instead of blood, rose petals were slingshot on stage, or hot tamales were spilt, or instead of the blatant rape of Lavinia there was a disturbingly poetic dance to “All of Me.” It is hard to capture all of the wonderful ideas that were put to use by the Ensemble, however I beg you to take my word on this stellar performance and treat yourself to a wonderful experience, so unique, so fresh, so beautiful. Washington Ensemble Theater, I salute you!

TITUS played at Washington Ensemble Theatre May 15th thru June 15th 2009
For details on the theatre, and their upcoming season, visit
www.washingtonensemble.org