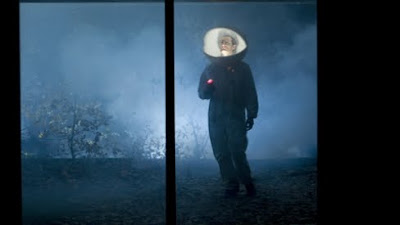 Review of Vivarium Studio's L'effet de Serge at On the Boards
by Chloe L.


From the moment the play starts you realize that this is not a play just like any other. The play revolves around Serge, skillfully played by Gaëtan Vourc'h, who is introduced to you as "someone who creates shows from 1 to 3 minutes in length.” While this introduction happens in the opening of the performance, by the time the ending of the play comes around, that is all you know about Serge-- he creates shows. Every Sunday, Serge invites one or two of his friends over for one of his shows, which are surprisingly average. Nothing about these "micro-performances" is created for any sort of shock and awe. Yet, after the show is finished, his audience member goes on about the magic and meaning of the performance, which you somehow missed. This antithetical reality leaves you wondering what they are so excited about, because the show was not as amazing as they are describing it to be. You wonder who these people are that are coming over to Serge's house and why they are there. By the end of the performance, these questions still linger in your head, and driving home you realize that it is a play without a point, something you rarely see. There was no moral, no ending, no climax, just one question: why? The show is mundane; it gives you a glimpse into someone's rather boring life. But you are somehow not bored, the audience passes the time always questioning what everyone on stage is thinking, what they are doing, and why. By the end of the play, you realize that the characters are doing nothing, just trying to make their lives worth something. They are searching for a piece of entertainment that they can't find elsewhere. You leave with more questions than answers, you leave wondering why you came.

L'effet de Serge has already closed.
Next up at One The Boards: Catherine Cabeen and Company • Into the Void
Apr 28 - Apr 30