With all the recent hullabaloo over the Mexican border, many Americans have forgotten our northernmost (and much less fussed over) Canadian border. However this border is what Brandon Vanderkool’s (the protagonist of Book-It theatre’s adaptation of Jim Lynch’s acclaimed novel, “Border Songs”) life revolves around.

Brandon is different from any other person in northern Washington. Perhaps even in the United States. Brandon is a 6’8”, dyslexic, socially awkward bird-watcher who manages to channel his strangeness and love of nature into border patrol. However, the plot is far more unexpected than what we may think of the Canadian border. In a plot full of smuggling, drugs, and the FBI, “Border Songs” takes a storyline one may normally think boring and turns it into a thought-provoking (yet occasionally comedic and strangely romantic) play. 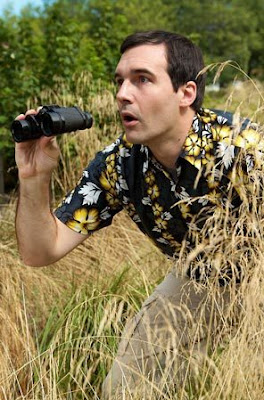 Like all other Book-It productions I have seen, “Border Songs” flows so smoothly into dramatization that upon seeing a play shortly afterwards not in their trademark Book-It style, I was almost confused. The characters come to life on stage, with Patrick Allcorn shining as the lead of Brandon. With such a small cast (per usual in a Book-It production, “Border Songs” has only 12 actors, though several play more than one part) the chemistry between characters is tangible.

Though at first, I’ll admit, I was slightly skeptical of the choice of adaptation — this play turned out to be a diamond in the rough. As proven by their multitude of northwest-based adapted plays, Book-It theatre has become the master of finding the perfect local book for the Seattle crowd.