It’s a battle of monarch proportions at ACT, as Mary Queen of Scots and her cousin Queen Elizabeth go toe to toe in the stellar new production of the classic Mary Stuart. If you’re a little rusty on your 14th century world history, here’s how it goes: Mary Stuart the ex-queen of France, and current queen of Scotland, after being chased out of Scotland seeks asylum in England. She promptly gets locked up because of her strong claim to the English throne (she is Elizabeth’s cousin after all), and she’s devoutly catholic (remember Elizabeth’s dad formed the Church of England expressly so he could divorce his wife and marry Elizabeth’s mom). After being locked up for nineteen years, Elizabeth’s court—fearing that Mary might spark a revolt in the kingdom—decides it’s time to finally get rid of that meddlesome Stuart woman. They hold a kangaroo trial in which they accuse Mary of conspiring to kill the Queen and they find her guilty. Mary’s life hangs in the balance as Elizabeth and her advisors battle back and forth about what should be done with this queen. Now don’t think that by watching the play you get to snooze in world history class, some significant parts of the play are fictional, or shall we say ‘tastefully embellished’ by the German playwright Friedrich Schiller. 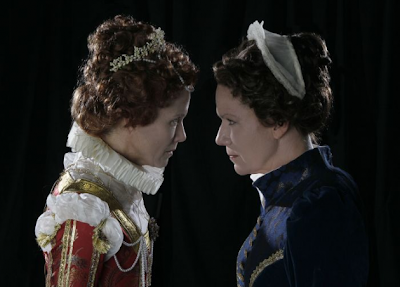 Suzanne Bouchard and Anne Allgood in Mary Stuart
The main attraction is rightfully the two queens. Anne Allgood as Mary brings the play together with her outstanding performance. She gracefully handles the somewhat cuckoo-for-Coco-Puffs queen with a gentleness and grace that her formidable experience has provided her.

Queen Elizabeth I is a huge personality that has been talked about for over five-hundred years, and we all have our own preconceptions about what she was like. Suzanne Bouchard as Elizabeth really brings the massive personality of the queen down to a relatable level. That said, I think Bouchard could’ve been even more powerful by being more regal at the beginning of the play, giving her somewhere to build to emotionally as the play carries on making the fabulous ending even more poignant.

The solid performances by both of the queens are enriched by the amazing supporting cast. Peter Crook shines as Lord Burleigh with immaculate control over his every move and emotion. R. Hamilton Wright portrays a captivating Earl of Leicester, and even though he’s a total skunk you are drawn in by his intense charisma. No wonder he’s captured the queen’s heart.

ACT has a wonderful in-the-round theatre, which was unfortunately rather awkward for this play. This play is very old, actually it was written in 1800, and consequently has an almost Shakespearean vibe to it—mainly it’s full of monologues. Monologues are better when you are looking at the person’s face and not their back. Of course with in-the-round theatre someone is going to be seeing the actor’s back you just can’t escape it. All that leaves the audience to go on is the inflection of the voice for these lengthy monologues of important plot-forwarding dialogue.

The ACT’s new production of Mary Stuart isn’t perfect, but it’s pretty darn close! With the best Seattle cast I have seen accumulated together on one stage, it is possibly the best play that will be produced in Seattle this season.