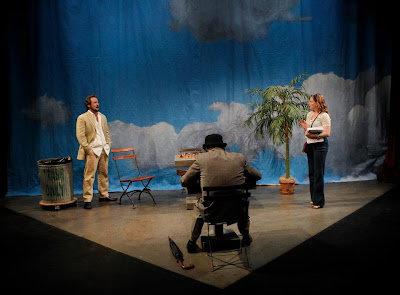 Photo by Chris Bennion
Watching Dirty Story is like listening to country music. It’s easy to fall deeply into the philosophical crooning, the idealist love themes and even the bittersweet turn into the second act, but take a step out into intermission or just out of the moments that the actors suck you into, and it feels a little forced.

The actors and lone actress really deserve the bulk of the credit. The chemistry between Brutus and Wanda, played by Shawn Law and Carol Roscoe, respectively, is captivating, but at times drags on. Playwright John Patrick Shanley conveys a message of the power of love, hate, belonging, and territorial needs and director Valerie Curtis-Newton uses the space in Intiman's new, teeny tiny Studio Theatre really well to explore and communicate those themes. Another major theme is the idea of “non-fiction” and how audiences don’t want to hear about fiction anymore. It’s a puzzling idea even having seen the play, as if Shanley was so consumed with the idea that it’s hard to convey the gravity of his philosophies.

That stage is the most redeeming factor. It forces the actors into the audience’s space, which is manipulated at different climaxes to make us want the closeness, or feel a need for separation. It is especially powerful in the one scene that gives this play its “R” rating, which I won’t give away except for the details that are especially creepy. Power tools, spotlights, and a ball gag are all be present for a compelling, yet extremely uncomfortable scene.

The final connection to country music is an adorable one, as Quinn Franzen plays a slightly pudgy, cowboy cutie with an acceptable accent named Frank. Frank and his sidekick, Lawrence (Allen Fitzpatrick), take us to the softer side of the emotions expressed in the first act, with a confusing connection to the trials of Wanda and Brutus’ deteriorating relationship. They bring us to an unsatisfying ending, with a plug about the ongoing festival, but it isn’t enough for a bad recommendation. This is a talented group of actors in a new, intimate performance space, with a limited run. It’s definitely something to take part in, if only to be a part of the exuberance of the Intiman Theatre Festival, going until late August. Reward the actors for their hard work, and be thoroughly entertained.
Dirty Story
Intiman Theatre Festival
Through August 25
Recommended for ages 17+
More info at intiman.org
Please note that Dirty Story is running in repertory with three other shows in Intiman's summer festival, which means that not every show plays every night. Please check the schedule before you go.