Review of Romeo and Juliet at Intiman Theatre Festival by Olivia O. 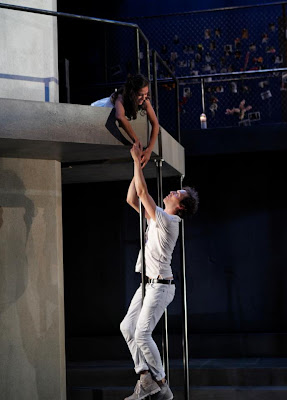 Photo by Chris Bennion
Whether you’ve seen it, been in it, read it in school, or maybe just watched Shakespeare in Love, you definitely know the story of Romeo and Juliet, those two star-crossed lovers that break through yonder window with a rose that would by any other name smell as sweet. Or something like that.

So the question is, how do you reinvent the story that everybody knows? It seems like every production I’ve seen tries to focus on the divides: old and young, love and hate, Capulet and Montague. But instead of focusing on the divisions, this production creatively chooses to emphasize the one thing that is the same for both families: the deaths of loved ones that result from the feud. This theme is woven throughout all of the show, especially in the costumes and set. Keep an eye out for what happens as the body count rises– it’s fascinating.

The actors match the creativity of this interpretation, speaking the language that we’ve heard a million times in a way that sounds new. I’m proposing that we rename the show Mercutio and the Nurse; Michael Place (Mercutio) and Marya Sea Kaminski (Nurse) steal every scene they’re in. Another standout is Shawn Law, who plays both Tybalt and Paris but is unrecognizable as being the same actor. In general, the supporting cast members outshine the leads, but the world-famous balcony scene is incredibly sweet and personal, with Romeo going into the audience and confiding his new love to us.

The show is long – nearly two and a half hours including the intermission – but the time flies by. The story and characters are so well known, but true to the theme of Intiman’s theatre festival (“don’t get too comfortable”), the familiar takes off in unexpected and imaginative ways. If you think you know Romeo and Juliet, give this production a try. You just might discover that the most famous love story of all time still has more to say.
Romeo and Juliet
Intiman Theatre Festival
Through August 26
More info at intiman.org
Please note that Romeo & Juliet is running in repertory with the three other plays in Intiman's summer festival, which means that not every show plays every night. Please check the schedule before you go.