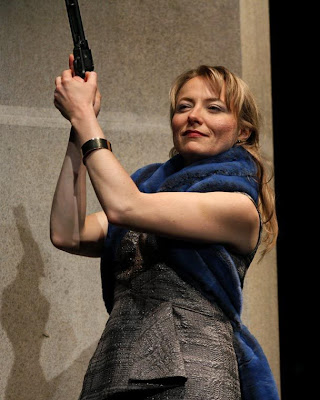 
With energetic music and equally cheerful characters, Henrik Ibsen’s Hedda Gabler begins as a simple story of a couple’s fairytale marriage and eager prospects...until you realize too late that the protagonist, Hedda (Marya Sea Kaminski), is actually the Evil Queen. When her dreams of becoming a wealthy society lady disappear because of broken promises from husband Jørgen Tesman (Ryan Fields) and competition from his rival and Hedda’s former lover, Ejlert Løvborg (Michael Place), Hedda decides to dust off her pistol collection and have some fun.

Kaminski does an excellent job of utilizing subtle but powerful facial expressions to reveal the unsettling, threatening side beneath her pleasant smile and saccharine demeanor. It’s in those possessed sudden moments—a twisted smile, twitching jerk, or fingering the furniture—that the audience knows something’s not right with Hedda Gabler. Unfortunately, some of the cast is not as great. Maid Berte (Hannah Victoria Franklin) emphasizes every word she speaks with a thrusting head nod, and, at the performance I attended, there were occasional slip-ups by other cast members. Lighting changes and ominous music are utilized to emphasize Hedda’s darker side, completely unnecessary as Kaminski plays the role of Hedda to near perfection and the added drama only detracts from her acting.

The show’s entire design and concept seems to be a reflection of Hedda’s personality and demeanor, especially that feeling of something unusual and out of place. It is not so much of a physical home, rather, a representation of her mind. While Hedda waltzes around in purple tights and teal Louboutin pumps, Aunt Julle dons a 50s dress complete with a fascinator. The set, however, is almost Victorian era, with ornate furniture and crystal pieces. People from her past sit atop the staircase, quietly watching as each scene unfolds. Exactly what time period or the order events are occurring in is unclear, just as Hedda sees the world in her own mutilated way. The set concept is clever, but it isn’t utilized to its full potential. In several scenes, important characters are obscured by props or facing away from the audience, and entrances are loud and distracting. The choreography could be smoother, but nevertheless, the audience still feels the full impact of each moment.

Ibsen’s true intention of stripping down the deception of human façades into raw emotion and desire succeeds through this one character alone. The faceted character of Hedda Gabler allows the audience insight into her crude and distorted image of beauty that ultimately culminates into the end of the play. Hedda Gabler is definitely not for the faint of heart.

Hedda Gabler
Intiman Theatre Festival
Through August 25
More info at intiman.org
Please note that Hedda Gabler is running in repertory with the three other plays in Intiman's summer festival, which means that not every show plays every night. Please check the schedule before you go.