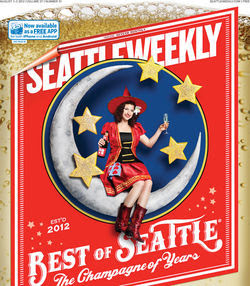 "Have you been to the theater lately? No? Could that be because it's so darn expensive? The savvy among you know that most theaters offer rush tickets that'll cut your price in half. But if you're a teenager—or know a teenager—an even better deal is at your disposal. The Seattle Center runs something called Teen Tix. A teen signs up, gets a pass, and uses it to buy $5 tickets at an incredible array of arts institutions in town, among them most theaters, the Seattle Art Museum, Seattle Opera, Pacific Northwest Ballet, EMP, and Pacific Science Center. When you consider that most theater and opera tickets are at least $40–$50, you'll know what a screaming deal this is. Better yet, on Sundays, teens get to take someone else–of any age—for $5 as well."