Review of Mozart's Requiem at Seattle Symphony by Safaa D.

To all those who are awaiting the chance to visit the Seattle Symphony: it's time to grab a cab to Benaroya Hall. All others who have experienced an enchanting evening at the Symphony, bring a friend, relax and let your mind be worked for you by the intricate weavings of Mozart’s Requiem. 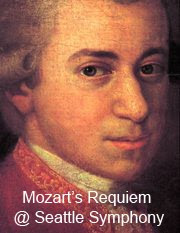 I am one of those people who has no formal musical education, sad to say, but I envy the people who can bring such clear crisp notes seemingly out of thin air. (I never could understand the kids who complained about piano lessons.) For now, attending the Seattle Symphony will fill the gap between me and this otherworldly language. Getting the chance to attend a night of mostly Mozart had me watching the clock all day until the time of the performance.

When the orchestra begins their first piece, Daniel Brewbaker's Be Thou the Voice, you forget that about thirty musicians are all playing on separate instruments. The orchestra, led by Gerard Schwarz, impresses you with the idea that all the musicians are playing one large instrument. And, in a way, they are.

Though music is suppose to be mainly an auditory art, the performance is visually stunning as well. The stage and the flashing instruments belonging to all those well-practiced musicians, give you the idea of a sunset complete with music. The orchestra appears to perform effortlessly, a tribute to the artists’ hard work and dedication.

The highlight of the evening for me, without doubt, is the French Horn performance by John Cerminaro. A truly moving spectacle, the intricate French Horn is brought to life in full playing Mozart's Horn Concerto No. 2. You feel as if a faun followed by a phalanx of wood sprites is going to jump out from behind the cellos. After this enchanting serenade, the talented Cerminaro shakes hands with the not-quite-drenched first violinist.

The night comes alive with the flute-like voice of Soprano Christina Siemens (replacing the absent Hanan Alattar for the Thursday performance) ringing out purely to the enraptured audience. This is not to overlook the rest of the talented soloists (Mezzo: Allyson McHardy; Tenor: Ross Hauk; and Baritone: Weston Hurt) who gave stellar performances. They were accompanied by the vibrant, euphonic Symphony Chorale.

People attending Seattle Symphony are people who truly wish to be here, enjoying and respecting the hard working musicians who in return give a stunning performance.

I hope all who enjoy music or wish to try something new will attend this enticing bit of culture. And a good thing about Mozart's Requiem is you don't have to go to a funeral to hear it.

Mozart's Requiem is closed. Next up at Seattle Symphony: Opera Highlights Festival I. More info at seattlesymphony.org