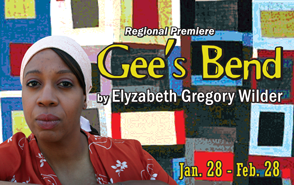 A review of Gee's Bend
at Taproot Theatre, in Greenwood
by Emma M.

Thirty miles southwest of Selma, on the banks of the Alabama River, Gee’s Bend, also known as Boykin, is a rural African American community that is home to some of the most talented quilters in the country. Recently discovered for their amazing and beautiful quilts, the stories of the women who made them are just as powerful.
Taproot Theatre’s production of Gee’s Bend marks the play’s regional premiere and is the first show of Taproot’s 2009 season.

Gee’s Bend follows the life of Sadie Pettway and her family as they struggle through the great depression, then into the 1960’s and the civil rights movement with an appearance by Martin Luther King Jr., and finally to the year 2000 when the Gee’s Bend quilters came into national fame.

The whole cast was packed full of amazing performances, however Tracy Michelle Hughes as Nella stood out. A great singer and comic actress, Hughes gave an outstanding performance throughout the play, but particularly as the older version of Nella. The doddering old lady with a stray hair roller in her hair waiting for the ferry that Hughes was able to capture was just incredible!

A huge element to this wonderful production was it’s music. Gospel music ties the whole play together. The powerful words and melodies that inspire the characters penetrate and infuse the audience with a feeling of hope and courage.
A powerful and moving story of love and change, for not only African Americans but for women as well, this play reminds us that if we stand by what we love and what we believe we can’t ever go wrong.