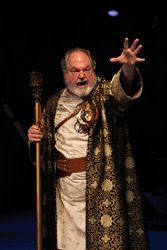 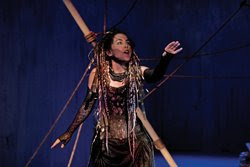 A review of The Tempest
playing at Seattle Shakespeare Company
By Jennifer B.

A Shakespeare for everyone, which is to say if you enjoy magic, love, and watching a spellbinding performance, then The Tempest is the show to see! The Seattle Shakespeare Company collaborates with internationally known local artists Jesse Sykes and Phil Wandscher, to make a mystically haunting performance. “Her [Jesse Sykes] background as a visual artist shapes her relation to the physical world as much as it influences her earthy, intelligent approach to song composition.” (Seattle Weekly by Hannah Levin, February 12, 2007)

This mysterious performance which has a heavy connection to spirits and unspoken wonders starts out simple but then explodes with imaginative events. For every speck of sadness there seems to be a positive upturn leaving you in high spirits. It starts out with a father and daughter pulled from luxury to the fate of being stranded on a deserted island, their only company being a rotten servant and a mystic woman that only the father can see. When the abandoned confront the people that abandon them it is no wonder that there is diverse mix of excitement and emotions. Everyone loves an adventurous love story.

The artistic team seemed to be perfectly matched to this performance. Sykes haunting tones would set a mood of complex darkness that would keep the audience intrigued forecasting future events. Magic is made when local artist collaborate.

In an amazing use of space, L.B. Morse’s set incorporates the entire stage. There is a wonderful use of color that brings the mystic elements of the show alive before the actors even enter the stage. Walking on the blues of the stage to find your seat draws and intrigues you before you even sit down. There is a seemingly misplaced ladder, however, that during parts of the performance cuts off a section of the audience, making it hard to connect to the action. Otherwise it is well designed to incorporate the small changes in location.

Throughout the enactment the costumes where innovative in design and well placed. Every actor’s character was well adorned in a matching article. But the most important costume of the performance seamed to fall short of expectations set by previously appearing garments. The witches’ costume that is worn during her confrontation of the characters that could not normally see her was missing the power that it was supposed to possess. With random wing pieces getting caught and with a simple yet ineffective design it just didn’t seem to match the importance of the action.

Seattle Shakespeare always has a strong and effective cast. They have a brilliant use of ensemble and can make even the most awkward scenes appear natural. All the singers captured the chilling nature of the music. The lead of the show was brilliantly played by Michael Winters. This demanding role was accomplished with the greatest care and complexity. A vast range of emotions was needed to accomplish this character that was portrayed to the greatest degree. A more simple character whose performance was not in any way lesser was the comic relief of Kerry Ryan who presence always lit the stage. The audience was filled with laughter from the moment she entered until the moment she left. Her brilliant understanding of comic relief enthralled the whole audience.

The performance was well pulled together from beginning to end. Though there were a couple of unexplained elements such as the garments of the main character being a modern hospital robe, which didn’t exactly seem to translate into the theme of the rest of the performance. George Mount remained true to the playwright and captured the magic intended by Shakespeare. Excluding the beginning, the audience was intrigued throughout the show. Though one has to admit that the start of the performance was a fair attempt, it just fell short of the energy that was intended. It was had no big impact which made it hard to connect with the rest of the performance.

Going to Seattle Shakespeare Company is always a joyous event. The staff is always cheerful and their excitement for their productions rubs off on the audience members. It is no wonder that they have such a dedicated following. Overall it was a meaningful and inspired performance.

The Tempest performs at the center House Theatre in Seattle Center
now through June28, 2009
Visit www.seattleshakespeare.org or call 206.733.8222 for tickets and information