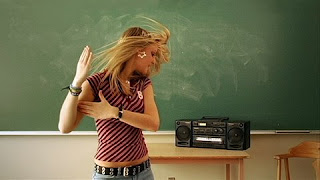 A review of At West of Pluto
playing at Seattle International Film Festival
by Emma K.

AT WEST OF PLUTO, a film from Québec, is a meeting between John Hughes’ cult teenage films and the classic nihilism of French cinema. Following a group of fictional kids over the course of 24 hours, PLUTO tries to be “real”. As the directors said before the screening, they wanted the film to be about teenagers not “26-year-olds pretending to be teenagers.” The movie accomplishes this pretty well in the first half. Quirky moments between the different cliques in high school and humorous class presentations given by all the characters set a mood of entertaining eccentricity – the stoner talks about his love for peanut-butter; the preppy girl gives a speech on Ben Affleck. Later on, the plot thickens when a house party goes wrong and an abusive brother returns home. In trying to explore the trials of adolescence, the story focuses too much on stereotypes than on the people behind them. Some moments are rewarding, but the ending doesn’t capture the unique funk of the beginning. PLUTO is not completely realistic, but worth watching if only to see a dog attempt to pull a tree down in segments throughout the entire film. It’s moments like this that are the most fun to watch, and strangely enough the ones most reminiscent of our own offbeat lives.


At West of Pluto played this past weekend at SIFF.
But, there is one more week of amazing films still to attend!
visit www.siff.net for complete listings