Review of The Whale @ SIFF Cinema by Samantha V.

When we think about wild animals, we believe that the ways in which they communicate and interact with each other, if those are the right words, are so different from our own that they're almost alien. It's like there's an invisible wall separating us from them. But one little lost orca named Luna changed all that for the residents of Nootka Sound by just, well, being an orca. 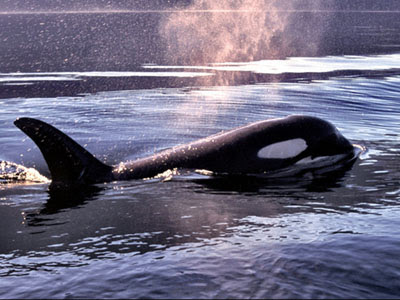 This documentary takes place on Vancouver Island which is part of the breath-taking country we call Canada. As you can imagine, the main character in this film is Luna. But there are so many others who play a critical role in his story. Like the First Nations who felt that Luna was a spirit and a blessing, the community who just wanted to know him better, and the wildlife officers who thought that Luna would be better off on his own. It was, dare I say it, a serious “tug of whale”. And that was not the only thing that was being tugged. My heart kept on going back to that adorable killer whale. So much so at times, that I wanted to reach right into the film and hug him. Anyway, through all this struggle, triumph had to come sooner or later and it did, for a little while.

Throughout this documentary it was clear that Luna wanted something. Most likely friendship and that's just proof of how much an orca really needs their pod. You could look at him, and know that he was intelligent and that in some ways, you were equals. Maybe that's just me. All I know for sure is that Luna made me laugh and cry and laugh again with his antics. Though we communicate differently doesn't mean that we're all that different in a way. It's just another way that Luna took down a piece of that invisible wall.

The Whale
Through September 15
SIFF Cinema