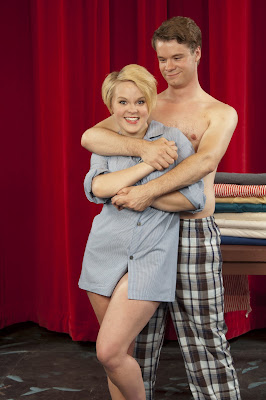 Derek Hanson as Sid Sorokin and Kirsten Helland as Babe Williams. Courtesy of SMT's Press Photos.
There's trouble in paradise at the Sleep-Tite Pajama Factory. The handsome new manager, Sid Sorokin, refuses to give the workers a raise despite their demanding and hard work. What's more, the leader of the Union Grievance Committee, Babe Williams, falls hopelessly in love with him--thus setting the stage for a real conflict of the heart. Set in the good ol' fashioned 1950's, The Pajama Game illustrates the struggle between power and love in a downright dandy musical.