Review of The Odyssey at Taproot Theatre by Lauren W.

The Aegean Sea. An enchanted island. The hall of a king. The underworld. The Odyssey, most epic of myths, takes the reader bounding through a fantastical ancient Greece. The images it conjures are grand and cinematic. How then can a theatre like Taproot hope to mount a production on its small thrust stage? The answer comes, quite simply and immediately, at the top of the production. A woman enters, Odyssey in hand, weakly attempting to recite the opening lines, until a muse descends to inspire her to truly embody Homer’s spirit. The storyteller and the muse speak and move as one, dance-like and captivating. This moment sets the stage for Taproot Theatre Company’s production of Mary Zimmerman’s The Odyssey: it’s not about making a spectacle, it’s about telling the tale. 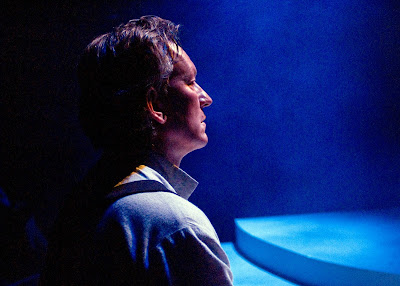 The Odyssey is, at its heart, about a man who needs to get home and the family that longs for him. If you’re not up to speed, Odysseus has just fought in the Trojan War (the whole horse thing was his idea). On his way home, he runs afoul of the god Poseidon, who dooms him with various afflictions that prevent him from coming home for twenty years. Most adaptations would cut to the chase and follow Odysseus’ story right from the beginning, but that’s not how Zimmerman’s script does it, because it’s not how Homer does it. Instead, the story unfolds to us in its own twisty rhythm, introducing us to Odysseus’ wife and son, letting us see the interplay among the gods, and whetting our appetite to finally meet our protagonist. 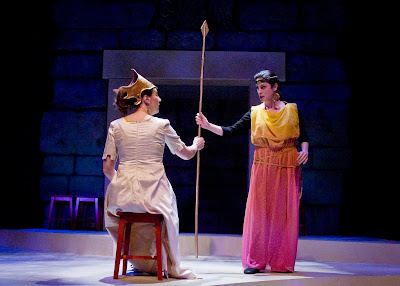 And when we finally do meet him, the production loses none of the feeling of a community narrative. The thirteen players band together, each playing dozens of characters, all to tell the story of this man. Odysseus himself takes on the role of the bard for the central portion of the story, leading the audience through his own adventures. Scott Nolte’s direction in this portion of the myth is intuitive and delightful. The men need to sail? They fall into form and row in time, the sound design providing the waves. They need to become pigs? They sink to the ground and snort. It’s incredible how simply and effectively the cast and director find ways to convey the fantastical, physical elements of the story. 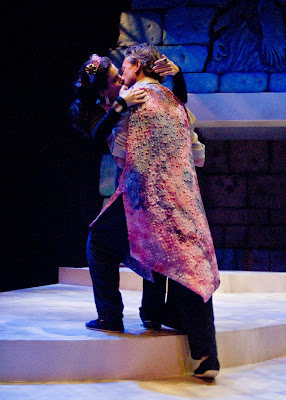 Throughout the production, Taproot keeps a balance between nods to ancient theatre and modern dialogue and structure. The result is refreshingly straightforward, but not lacking in touches of fun and artistry. From the plaintive bards’ songs to Hermes in converse to the big fight in the end, Taproot Theatre’s Odyssey is organic and captivating. Whether The Odyssey is a story you know by heart or a foreign narrative, Taproot’s production will remind you of the power of a tale well told.

The Odyssey
Taproot Theatre
Through March 5