Review of The Brothers Size at Seattle Repertory Theatre by Ehrik A.

There has been a lot of hype surrounding “newcomer” Tarell Alvin McCraney. Already, his work has been compared to those of David Mamet, Tony Kushner, and August Wilson. So when The Brothers Size (part two of McCraney’s Brother/Sister triptych) came to Seattle, my expectations were high. 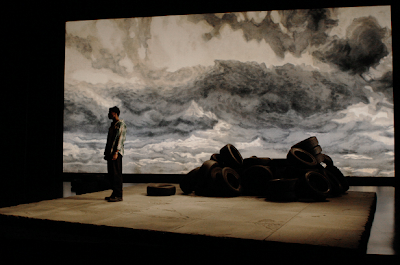 The Brothers Size follows brothers Ogun (Yaegel T. Welch) and Oshoosi (Warner Miller) Size and doesn’t need its audience to be familiar with the other plays of the trilogy. The older Ogun is hardworking and determined to protect all that he has—ownership of an auto-repair garage and the company of his brother—while the younger Oshoosi currently wrestles with his new freedom after having been released from prison. Enter Elegba (Eddie R. Brown III), an ex-con who befriended the younger Size while in the pen, who also wants to have a loving and guardian relationship with Oshoosi. The audience observes the fraternal love triangle organically evolve as what can be taken as a conventional story becomes as captivating as it is moving.

Each actor plays his character exceptionally well and is able to further showcase a variety of theatrical talents as the cast sings, chants, and dances throughout the play. Brown’s Elegba is particularly entrancing as you are constantly forced to reevaluate his character as a both a genuine friend and an ominous threat to the young Oshoosi. Welch and Miller also share a special chemistry that authentically models the highs and lows of brotherhood. 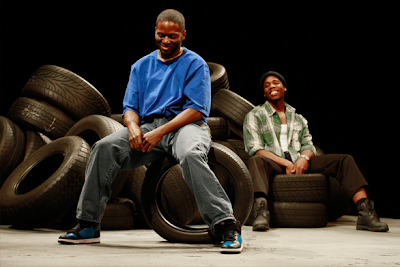 And while each performance is virtually perfect, the true star of the show is the writing of 30-year-old Tarell Alvin McCraney, who wrote the script for Size while attending the Yale School of Drama. Replete with fast-paced dialogue and vivid and eloquent speeches, the language perfectly injects poetry into contemporary vernacular and is even ritualistic at times, playing into the elements of African storytelling that are prevalent throughout the show (the names of the characters stem from Yoruban mythology). Furthermore, the repeated use of more familiar (and profane) slang and the use of the “N” word continuously ground us in the delicate reality that serves as the foundation for this modern myth.

Still, Size shares with the audience many heartfelt moments straight from brothers’ home including a soulful rendition of Otis Redding’s “Try a Little Tenderness” that leaves you smiling and mildly uncomfortable at the same time. And the play concludes with an emotionally searing and beautiful ending heavy enough to keep you in your seat despite your attempts to get up for a standing ovation. But I assure you. Get up you will. Go see this play.