Review of Vanities: A New Musical at ACT Theatre by Safaa D. 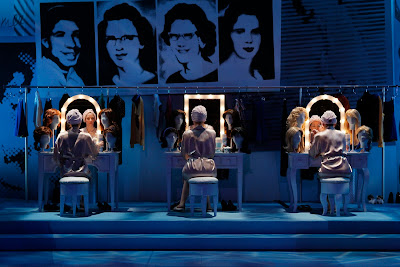 Photo by Chris Bennion
Have you ever passed by an advertisement for a show and knew you just had to attend? It happens to me more often than not. This was how Vanities came to me and I was thrilled to have the opportunity to review it.

Vanities: A new Musical follows three best girlfriends from the changing 60's to the narcissistic 80's displaying their transformations from teenage queens to experienced older women. In spite of their best laid plans, they follow different paths in life, not knowing when they’ll meet again. Set to the musical numbers of David Kirshenbaum, the actresses relay the lives of Joanne, Mary and Kathy through heartbreak, happiness and all the rest. Never leaving the stage--even for costume changes--the actresses sing their hearts out to tell the stories of these three women. 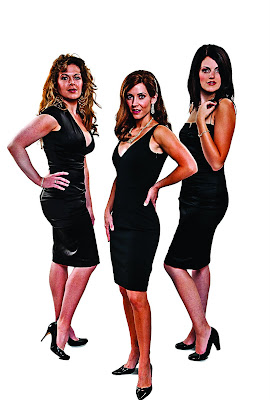 Billie Wildrick as Mary, Jennifer Sue Johnson as Joanne, and Cayman Ilika as Kathy
Photo by Chris Bennion
Jennifer Sue Johnson, Billie Wildrick and Cayman Ilika take the stage and fill it with their powerful voices. Ilika (Kathy) outdoes herself with a rich and melodic voice that she seems to project effortlessly. You don't have to be a great singer to play in a musical, but Ilika's voice would be enough on its own. The fairylike Johnson (Joanne) and spicy Wildrick (Mary) portray their characters well, bringing out different personalities from two girls of the same town, each with their own view of the world.

The music goes from upbeat to slow in tempo with a live piano/keyboard accompanist. Ilika's solo "Cute boys with short haircuts" lends a sweet note to the play. While the cheer routine by the three make it fun and tell the hopes and dreams of 1960's girls. Kirshenbaum's score is fun and entertaining, while telling the stories and aspirations of three American women. 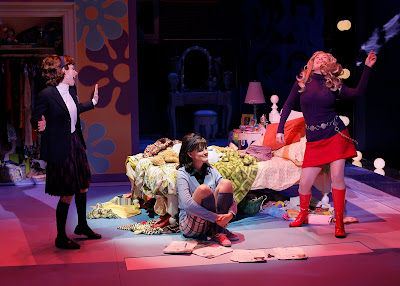 Photo by Chris Bennion
This coming of age play craves audience for its 101 performances and, even though it’s a story about women, it promises to please all genders. I find this play has a wonderful authenticity. It asks questions like: What does being beautiful mean? How do you choose the right road? Is there one?

Vanities will sweep you away in a whirlwind of music, thought, plans and cleavage. ENJOY!

Vanities: A New Musical
Produced by 5th Avenue Theatre and ACT Theatre
ACT Theatre
Through May 1, 2011