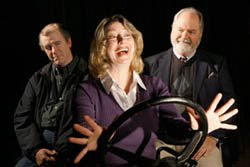 As soon as one enters ACT, the vibrancy of the venue and the whispering of the play-goers’ excited voices sends chills up the spine. Once sat into my seat by a friendly usher, I couldn’t help but notice some similarities between the stage set up and ancient amphitheatres. The circular construction of the stage, and the ever-rising seats served as a perfect auditorium for the actors. Speech was likely to be heard crystal clear, which it was the whole time sans clunky microphones. However beautiful and rousing the venue was, the true center of attention was “Becky”, or the talented actress Kimberly King. Assisted by loving husband, Joe (Charles Leggett), this team made a funny script hilarious with their unbearable realness and almost too nuanced affections of husband and wife. However, when Becky meets a wealthy new man (Walter- Michael Winters), her loving relationship falls into a bed of lies.
The play consisted of not only dialogue, but pauses for the audience because the lines were laugh-out-loud funny. Steven Dietz, playwright of Becky’s New Car, infuses a sarcastic humor and faith in an amazing cast to bring to life an experience that seems not only Becky’s, but the audience’s watching. To further this experience, the play is conducted in a viewer-interactive manner: many of the actors talk to audience members sitting in front rows. Charles Leggett (Joe), in a particularly intense scene even screeched with utter amusement, “C’mon Becky, it’s not like all these people aren’t right here in front of us!” The fact that the cast acknowledged our existence made this play unique in a very one-on-one sense: we were a part of the play, our existence made it or broke it, and they knew it.
The play was a wild ride throughout: love triangles, fiancés, and luxurious SUVs, “Becky’s” had it all. However humorous the script, the play involved a sense of seriousness with dabs of philosophy and “wisdom through experience” moments. In the play, Becky spoke to the audience of her recently deceased friend, “She would always say when a woman asked for a new car, she really wanted a new life.” And boy, did Becky drive away full speed ahead in that “car”. But, did she ever make a U-Turn? That’s for the audience to know, and you to find out!