Review of A.W.A.R.D. Show, Friday, January 28th at On the Boards by Samantha V. 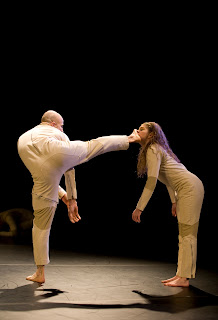 The curtains part and all I see is a large white sheet stretched across the floor of the stage with big lump in the center. My first thought was “What the heck is going on!?”. It turned out that the lump was actually two nude dancers with a camera when a screen that was on the back wall of the stage showed what was going on underneath the sheet via a live video feed (don‘t worry, it’s art). I was impressed by this, but I couldn’t get a grasp on what this performance was about. As it went on the sheet disappeared and the dancers, Keely McIntyre and Noel Plemmons, became more aggressive in their movements. Then something in my head went click. They were a couple, likely married. And I knew that they were suppose to be fighting, but I was not getting a feeling of anger from them which I expecting at this point in the piece. I don’t think that the vocalists singing in the background were helping. It’s not that they weren’t good, they just didn’t add to the emotions that were trying being evoked in this performance at that time. tEEth was the winner on the 28th. I have no objections.

Three words can sum up this work: deep throbbing pain. That was more than clear in the jerky, thrashing way the dancers moved. Their costumes were dark, though not in color. The lead dancer wore what looked like blood-soaked bandages with a bullet hole just where her heart should be. The music accompanying this hurtfest was live. A steel and electric guitar, and a small drum kit sit just behind the action. This dance came across strongly to me, and I will remember it for a long time.

I felt that this dance was very well done. It was German inspired contemporary, but kept to its roots with the men wearing possibly unwashed lederhosen. It was funny in its own way like when Little Bo Peep’s wannabe walks on stage to thirty seconds of laughing, or when two of the dancers begin to swivel their hips vigorously while showing a blank face to the audience. I had to keep telling myself to keep my composure. It was great! 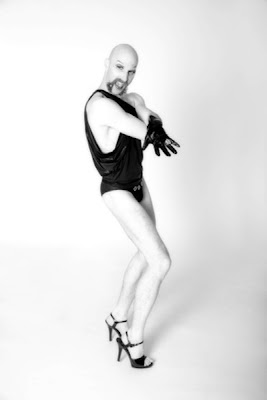 Now, this one I was not ready for. I did prepare myself for some possibly strange stuff, but I was not expecting three stripteases in a row. By the third time it had lost the effect especially when done to “Halo” by Beyoncé. Other than that, the performance was okay. This was a multi-media production which was just a bit more impressive than a slide projector and a bed sheet. In the video part of it, which was about sorrow, this awkward dog kept popping on and off screen, and no one knew why that dog was even there. I found it quite funny. I also thought that the costume choices were of impeccable style. In the end, all I wanted was there to be more dancing AND more clothing.


tEEth won the second night of A.W.A.R.D. Show, and will move on to Sunday night's final. Stay tuned to the blog for daily A.W.A.R.D. Show recaps by our reviewers.

The A.W.A.R.D. Show is now closed.
Up next at On the Boards: Paul Budaitis' (IN)STABILITY, a theatre piece using "fervid, multilayer storytelling, quasi-standup comedy, and a highly physical aesthetic to create an intimate connection with the audience"
February 3 - 7
On the Boards