Sunday night at On the Boards, every seat in the house was packed in anticipation of the grand finale of The A.W.A.R.D. Show, a competition for Pacific Northwest choreographers. Twelve choreographers had entered, and for the previous three nights audiences had crowned a winner from among each group of four. Now, with the dirty work of selecting the finalists done, it was our job to sit back and enjoy an evening of spectacular dance before crowning the winner. And it was indeed spectacular. 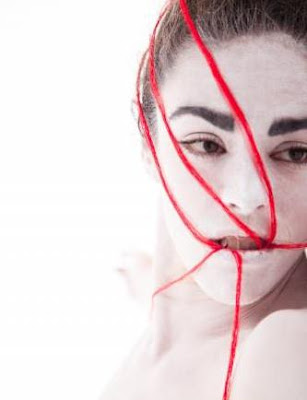 
First to perform was zoe|juniper, with a piece entitled A Crack In Everything. The dance was arresting, opening with female dancer moving in tense, angular steps while a red string extended from her mouth, pulled taut by an unseen hand offstage. The imagery of a leash was inescapable, and the dance remained tense through its ever-shifting moods. At times graceful, at times harsh, every muscle in the dancers body was taut. The dance was engaging, eye-grabbing, and the emotions that were being conveyed were palpable. At the same time, something was missing; the piece did not fully tell a story, nor did it paint the scene fully. Without the narrative to back it up, the piece remained simply a dance.

Lack of narrative was certainly not an issue for tEEth, which brought a piece entitled Home Made. It was an approach that I had certainly never seen before. The stage was taken up by a white sheet, under which two dancers twisted and played, sensuously and innocently. They passed off a video camera and flashlight, and the images were simultaneously transmitted to a screen at the back of the stage. The mood was intimate, not voyeuristic; it was a window into the private world that exists only between two people in love. We watched them play together, lie together, and dream together. Not once was the candid exploration awkward or uncomfortable, which is certainly to tEEth’s credit; they masterfully took a world that survives only behind closed doors and let it shine. But when the sheet was drawn back, the dance became violent and fearful, layering on all of the insecurities and trappings of public life. Sinking further and further into violence, it ended miles away from where it began, and this was its crowning glory; layer by layer, tEEth was able to take the audience on a journey that was not only compelling, but that everyone watching could relate to. 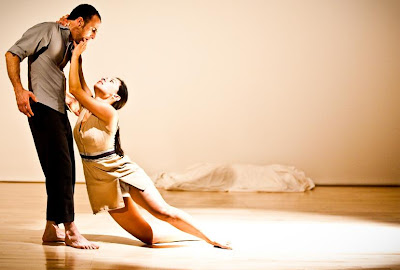 
Last but not least, The Offshore Project preformed, bringing a whimsical piece, The Buffoon. Energetic and comical, Victorian characters romped around the stage, chasing an enigmatic and boyish character dressed entirely in white. While enjoyable to watch, the piece again seemed hard to reach; at times the dance was even less engaging than the live band that accompanied it. Granted, the score was wonderful, and used to full effect. Unfortunately, you could never shake the feeling that there was something more you just weren’t getting. 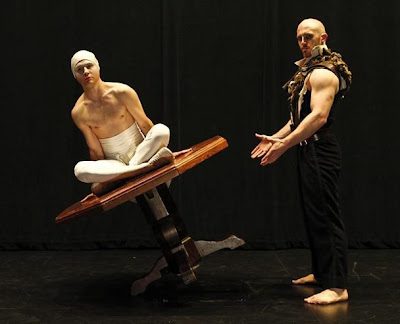 
While I may be comfortable spouting off my unqualified opinions on this blog, playing God was something I was not comfortable doing. All the same, I cast my humble vote and joined the rest of the audience, milling around in the packed lobby waiting for the votes to be tallied. Everybody had their clear favorite, but the cheers were boisterous and excited when tEEth was announced as the winner. The bigger winner? The dance community in the northwest. Cooler than $12,000 is the fact that we have a dance scene that is actively moving in new, funky directions; I was grateful just for the chance to see it at work.

The A.W.A.R.D. Show is now closed (but it'll be back next year!)
Up next at On the Boards: Paul Budaitis' (IN)STABILITY, a theatre piece using "fervid, multilayer storytelling, quasi-standup comedy, and a highly physical aesthetic to create an intimate connection with the audience"
February 3 - 7
On the Boards