Review of All My Sons at Intiman Theatre by Ehrik A. 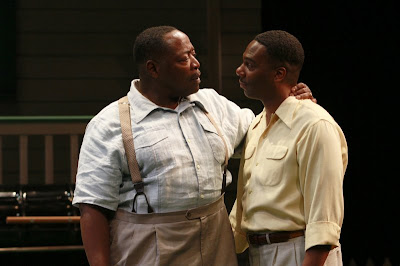 Chuck Cooper and Reginald Jackson
Photo by Chris Bennion
In order to prepare for this review, I took a trip deep through the box-filled jungles of the family garage to procure a frail, dusty, water-damaged, and horribly annotated copy of All My Sons—thanks, Dad. Admittedly, I feared that going to review such a respected and reproduced classic as this set itself up to sounding a little like another one of my English papers without adding much that hasn’t already been said about this play. Synopsis: Set in America during the aftermath of World War II, Arthur Miller’s All My Sons explores the conflicting personal, familial, and societal commitments that ultimately limit the achievability of the American Dream.

However, in her Intiman debut, director Valerie Curtis-Newton brings a new lens to Miller’s work by setting the play closer to home in Seattle's Central District with a non-traditional African-American cast led by Tony Award-winning actor Chuck Cooper. The decision works exceptionally well and adds a unique element to the show that not only fits the play’s themes, but also enhances them. 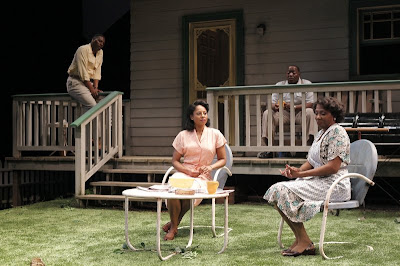 Reginald Jackson, Nicole Lewis, Chuck Cooper and Margo Moorer
Photo by Chris Bennion
The story centers on factory owner Joe Keller (Cooper), who is suspected of allowing faulty airplane parts to be shipped, resulting in the deaths of 21 military pilots during World War II. Although Joe was eventually exonerated, his business partner Steve Deever was sent to prison for the crime. Nevertheless, the issue resurfaces again when the two men’s children begin to discover the answers to unresolved questions and ultimately find out the ethical dilemmas one may face when trying to achieve the American idea of success.

The acting is consistently terrific with Joe, his wife Kate (Margo Moorer), and their son Chris (Reginald Jackson) standing out among the ensemble. Perhaps the best and most touching moments of the play occur when these three characters are on stage together, and each role equally contains the capacity for you to see a bit of yourself in their thoughts and actions.

Whether or not the translation of a traditionally white cast of characters in the Midwest to an interracial one in our own Pacific Northwest is historically plausible is irrelevant. The characters’ race never distracts from the core issue of the play, and if anything, it sets the stakes higher as a chance at racial equality implicitly becomes a factor in the conflict between self-interest and self-sacrifice (this may not make sense now, but watch the play and have your questions answered!). Furthermore, the reimagining adds dialectical flair to the original text as the actors employ an African-American cadence, adding a more natural lightness and humor to the dialogue.

This particular incarnation of All My Sons was a fitting way to kick of this crucial season at Intiman, taking a classic American story in an adventurous new direction. Uniformly thought-provoking and enjoyable, this one is a must-see.

All My Sons
Intiman Theater
Through April 17