Review of Of Mice and Men @ Seattle Rep by Jamie K.

Most people think of Of Mice and Men as a novel, but fewer realize that John Steinbeck himself adapted it for the stage in 1937, the same year that the book was published. The story examines the plight of migrant workers in the 1930s. The two main characters show what friends really are, with George leading the way, and Lennie always faithfully following him. 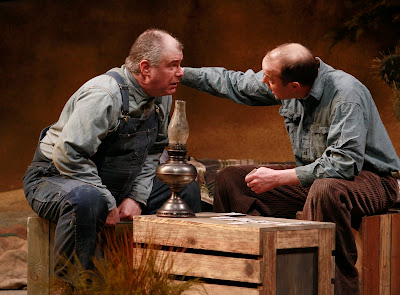 Charles Leggett as Lenny and Troy Fischnaller as George. Photo by Chris Bennion.
Troy Fischnaller and Charles Leggett play the unforgettable roles of George and Lennie. The memorable pair travel to a ranch to try to raise enough money to get a place of their own. My first impression of the portrayal of George was that he was too angry and mean. But as the show goes on, Fischnaller’s performance really grows on you. He provides just the right amount of anger, sympathy, sadness, and humor. Fischnaller really portrays the part the way it should be played: a tough man, who gets irritated rather quickly, yet has a soft side. Leggett, who plays the part of Lennie, makes you laugh, cry, and feel sorry for him. Leggett and Fischnaller make a great combination for the parts of George and Lennie, by convincing the audience of their deep friendship and loyalty.

The other actors really show how versatile they are. Seanjohn Walsh plays the part of Curley. In the book, you see Curley as a hard, angry man with a hand full of vaseline. But instead Walsh plays the part stuck up and vain, which evokes a laugh every time he comes on stage. He adds a comedic side that helps people cope with the hard issues in the play. 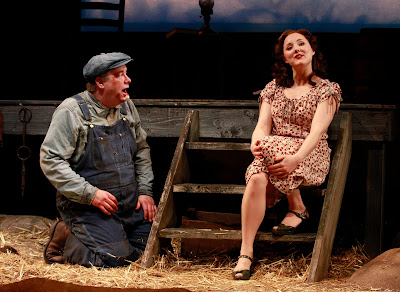 Charles Leggett as Lenny and Elise Karolina Hunt as Candy’s Wife. Photo by Chris Bennion.
Seattle Rep has a history of putting up great sets. In this production they didn’t hit a home run. The set is very good, but it just doesn't stand out. In the production they show all of the houses without walls, which is fine, if you can make it work. But they don’t come through; a couple times actors walked through walls instead of the doorways. That was the only item in the production that wasn’t great.

Of Mice and Men
Seattle Repertory Theatre
Through April 10