Review of West at On the Boards by Joshua G.

West is a frustrating experience to discuss objectively. In more than 2 hours of wondrous inexplicably appearing objects, freshly cut human scalps (Yummmm!) and falling bouncy balls; there is a LOT to like here. Disappointingly, the performance switches from pure whimsical (at times stunningly beautiful) awesomeness, to a dull mind numbingly amateur exhibition. 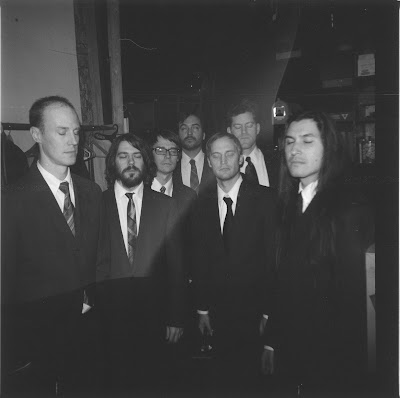 “Awesome”, a local Seattle Performance Art/Band is the brain behind West. Assisted by director Matthew Richter, the team depicts our very own beloved Northwest. You can feel a sense of autobiography in the piece. Especially when West depicts the pained necessity to get away, “But don’t you see… you have already forgotten me.” Through memorable songs, unfunny metaphorical jokes, and animated montages; West discusses moving away from home, the Native American’s plight and Lewis and Clark. If anything “Awesome” puts on original inventive theatre.

As West reminds us “all things change” and it’s not always for the best. Yes, the performance takes a while to get going and can be at times….slow. The band frequently aimlessly pokes about the set, adding to themes of lost disillusionment in an unfamiliar setting. But these observations are minor when compared to West’s real monster in the closet.

To quote my adjacent patron at the end of Act II, “You have to be F*ck’n kidding me”

Although this comment may be a bit harsh, I was this close to leaving. The act begins with a perfectly acceptable tale of a man who has fallen into a depressing rut of day to day life. The audience sees a man side stepping, left and right between two narrow columns. It’s all that is visible, because attached to the columns are white sheet’s covering the rest of the stage. It’s a memorable image. (It’s the only image we get… so it had better be!) But Richter made the most amateur mistake possible. He apparently never checked his sight lines. So, 2/3rds of the audience can't see anything but the white sheet for the seemly never ending boring entirety of the WHOLE ACT!!!!!!!

At least when something is consistently mediocre you can call it bad. But West doesn’t deserve to be called an unworthy venture. I love the music. The show can be shockingly violent, atmospheric and heartfelt. Looking back I would like to remember West as an enjoyable hard shelled crab. The worthwhile stuff is really hard to get at. Eating it, can be an at times tedious activity, but the added effort makes it’s deliciousness that much more rewarding.