Review of It's a Wonderful Life: A Live Radio Play at Taproot Theatre by Shannon L.

As some of you may already know, Taproot Theatre Company’s space was severely damaged when the building immediately next door was set on fire as a victim of a string of arsons in the area on October 23rd. Authorities didn’t think they’d be able to save the building. Luckily, they were wrong. Taproot is currently being restored and remodeled and hopes to be open again in January. While a large setback - and I mean LARGE setback; Taproot couldn’t find another venue to accommodate the world premiere of John Logenbaugh’s Sherlock Holmes and the Case of the Christmas Carol, and had to find a Plan B show for the holidays - you couldn’t guess that this company of six actors was a Plan B at all. 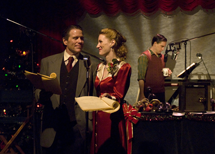 The production of It’s a Wonderful Life is different and entertaining, featuring a perfect blend between the personalities of the actors, and the characters of the story itself. Filled with real-life sound effects right on stage like high heels, car doors, horns, bells, and whistles, you become part of the “live” 1947-style broadcast of the beloved story It’s a Wonderful Life. Eric Riedmann, whom you may know as the “Audio Visual Guy” from Disney’s 1999 10 Things I Hate About You plays the man behind the sounds... and the several impeccable accents. The actors switch between characters without a hitch, and when you’re “off the air,” they live onstage as 1947 versions of themselves. Featuring TV star Grant Goodeve as George Bailey, the production is a Christmas Carol-esque show that shows us the impact of our lives on others, and how without us, others may cease to exist. While It’s a Wonderful Life provides the opportunity to look at theatre through a new lens, it was difficult to see past the cliché-colored haze of do-gooder George Bailey and be swept into the story. This is a Christmas show; of course it has a happy ending! Real life doesn’t work like that, which is why I didn’t find it believable. I would like to make one thing clear though: the story, not the acting, was insincere. This is a great show to enjoy around the holidays; if you don’t mind the cheesy topping, this is definitely a worthwhile evening.