A review of A Christmas Carol at ACT by Jenny S.

Christmas has come to the ACT Theatre, and there is not a Rockette in sight. Nary a reindeer blinks its luminescent nose, and only a woebegone handful of snow drifts from the technically endowed ceiling of the theatre. It is against this austere backdrop that Kurt Beattie and R. Hamilton Wright set the stage for Dickens’ formidable fable, revealing a story that is masterful in its simplicity. What seems the stuff of hearthside entertainment, allegorical drudgery, or at the very worst, literature to be consumed under the forceful eye of a high school English teacher, proves itself to be a mirror to society, withstanding the test of time from Dickensian England to health-care-crisis-two-wars-for-the-price-of-one America. 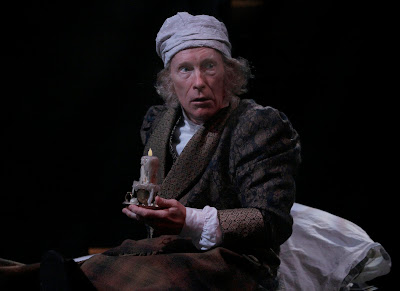 A Christmas Carol is a seminal classic. It follows the story of one Ebenezer Scrooge, a miserly old coot whose grizzled gray locks have certainly seen better days. He delights, if you can call it that, in counting his abundant stacks of cash, and would probably be most welcome in an Algebra class. He displays an untoward amount of energy spitting on those who have the misfortune to stumble across the path of his contempt for Christmas, charity, and seasonal cheer. Bah humbug indeed, for our aged protagonist is shown the error of his ways by three Christmas sprites, who respectively show him his downfall in an unhappy childhood, the misery he has inflicted, seemingly on the whole of England, though particularly the cheerily destitute Cratchit family, and finally a vision of Scrooge’s own coffin being paraded through the streets of London, to the despair of few. When the last, faceless specter dressed in the type of rags found moldering on the Costume and Display sales rack finally sinks into the floor of the theater amidst billows of red smoke, Scrooge is a changed man. Leaping and even tap dancing with glee that belies his age, dear ole Ebenezer runs through the street in his bathrobe, purchases for the impoverished Crachits a turkey the size of Santa Claus, and the rest is history. Or Christmas future, at the very least.
The two directors, Kurt Beattie and R. Hamilton Wright, not content only to mount a first class production, also alternate the role that has become a household name and even a catchphrase. In the November 29th performance, R. Hamilton Wright exhibited curmudgeonly cruelty in the best way possible. Seething in upper class furor, he crows that the poor “had better die quickly, and decrease the surplus population!” After his transformation Wright is spiffily hilarious, tap dancing around the rounded theater crowing “I feel happy!” and contradicting his era by anachronistically high-fiving strategically seated audience members. Brandon Whitehead also stands out as the jovial Mr. Fezziwig, and Chloe Forsyth pulls heartstrings and knows it, as the freakishly adorable Tiny Tim. The supporting actors twist their tongues around a panoply of British accents, and pop merrily about the stage ringing in the yuletide spirit and sporting different shades of plaid.
This production is not a new one, it is in its thirty-fourth incarnation at ACT and has become a perennial favorite of Seattle crowd. The 2009 production betrays its age only in that it has been honed over time into a perfectly un-preachy confection. More than any one actor or technical enchantment, Dickens’ words shine in the script adapted by Gregory A. Falls. Once one allows high school enforced reading prejudices to fall away, Dickens’ words, bright and polished as sleigh bells, really do fulfill the great expectations one has of the literary giant.
The Beattie and Wright production of A Christmas Carol is visually appealing, intelligent, and occasionally humorous. (I don’t wish to spoil a surprise, but there is a sudden and very hilarious moment involving cross-dressing.) And I’ll be the first to admit that Tiny Tim’s travails actually had my eyes welling up. So stock up on peppermint humbugs, Kleenex, and good cheer, and bear witness to a show that was captivating theater-goers when your parents still believed in Santa.
- Jenny S.
November 29th, 2009
A Christmas Carol plays at ACT now through December 27th.
Only the following select performances of A Christmas Carol are Teen Tix-eligible. There are NO companion (2 for $10) tickets for any of these performances.
December 8 @ 7pm
December 10 @ 6 and 8:30pm
December 11 @ 6pm
December 15 @ 6 and 8:30pm
December 16 @ 6 and 8:30pm