Review of The Prisoner of Second Avenue at ACT Theatre by Safaa D.

"Did you call the police?!" Mel Edison asks when he comes home to find his apartment ransacked. "Didn't I say that?" Mrs. Edison retorts. Mr. Edison replies "Did you tell them we've been robbed?!" 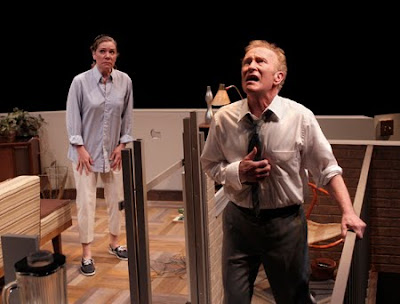 Allgood and Hamilton
Photo by Chris Bennion
Mel Edison (R. Hamilton Wright) is the average 1970's middle class New Yorker. With two daughters in college, 22 years in the workforce on his resume, and a furnished apartment made complete with a Betty Crocker cookbook, he has what is considered to be a comfortable lifestyle. When his career comes to a screeching halt, his appliances begin to malfunction, and his apartment is robbed, the pressure proves too much and a midlife crisis complete with nervous breakdown sets in: His world and mind are turned upside down.

Unable to function and driving his supportive wife (Anne Allgood) nuts, we watch through a comedic lens as he seeks vengeance on his water bearing upstairs neighbor, attempts to make the children's softball team and deals with the loss of his job.

The playwright Neil Simon's wit is irresistible and the art of a comedic genius is showcased well in this theatrical performance. Not only can he turn what could easily become a flat joke into something, he has the entire house roaring at a perfectly timed bit of stereotyping we can all relate to. Comedy is not an easy genre, but Simon's full-on humor and beautiful construction of the play makes it one of my favorites.

I find it somewhat amusing that, though the script is written with the language structure of native New Yorkers, the two main actors voice the West Coast pronunciation, giving the play a different feel than what I've experienced before. Mel Edison’s estranged and eccentric family (played by John Aylward, Julie Briskman, Kimberly King, and Cynthia Lauren Tewes) all seem to have inherited Big Apple lingo, while their brother Mel has a West Coast lilt.

As always, attending ACT is high on my list of favorite things to do with a Friday night, but Neil Simon's Prisoner of Second Avenue gives attending an extra kick. Complete with water raining down from the ceiling, hilarity and only a conservative dose of profanity, the Prisoner is in the house. And he requests visitors.

The Prisoner of Second Avenue
Through May 29
ACT Theatre