Review of Black Nativity at Intiman Theatre by Marissa B-T

An element of audience participation was evident from the beginning of Black Nativity: A Gospel Song Play. It commenced with a rocking number from the fantastic jazz quartet. Then silence reigned and a spotlight fell on director Patrinell Wright, singing the first notes of “Joy to the World” from the back of the house. She paused a few seats down to greet a “handsome young” audience member of seven or eight, who was befuddled by the attention. 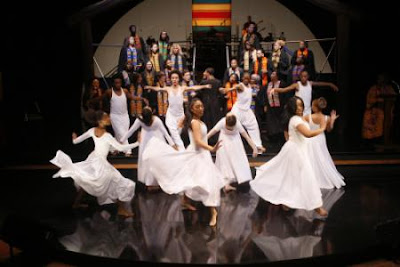 Black Nativity is in its twelfth and final year at the Intiman Theatre; next year it will be staged at a larger venue. The show is quite a collaborative effort, directed by Jacqueline Moscou, but with musical direction and arrangements by the multitalented Wright and choreography by Kabby Mitchell III. An African-American retelling of the Christmas story interspersed with over twenty gospel songs, Black Nativity was written by Langston Hughes, so this is a fairly old tradition -- it debuted on Broadway in 1961. Admittedly, this version is different from the original, with closer to forty performers than the 160 in 1961. Also, parts of the play have been interpreted differently, with newer songs incorporated under various directors. The heart of Black Nativity remains unchanged, however. Its joyful exuberance and message of unity and hope are clear.

About half of the songs on the program are traditional Christmas and/or gospel pieces and the rest are original. Whether familiar or new, all are arranged with a focus on energy and harmonization that is phenomenal to hear and see. A quintet of women harmonizing beautifully a cappella in the second act absolutely awed the crowd on opening night. From “O Come, O Come Emmanuel” to “Steal Away,” “We Three Kings of Orient Are” to “Looking for a Miracle,” the Total Experience Gospel Choir and the dancers threw their whole selves into this celebration of life. The party didn’t stop at the edge of the stage, however; dancers shimmied up the aisles, and soloists shook hands with audience members. The infectious happiness of most songs incited the audience to clap along.

Black Nativity is uplifting, energizing, and everything else that is necessary for a stirring welcome into the season of Christmas. As religious as it all is, it is not only for Christians; Pastor Wright asked for a show of hands from a dozen religions, which revealed the audience to be surprisingly diverse. The second act seemed too long -- the run of the play is approximately two hours and fifteen minutes, excluding intermission. The duration should not be a deterrent, though; you’ll be kept awake (and sometimes even on your feet) by the expressive voices, whirling dances, and inspirational poetry of Black Nativity!