Review of Twelfth Night (Or What You Will) at Seattle Shakespeare Company by Yvette J.

It doesn’t matter whether you’re a Shakespeare expert or a newbie to his work, Twelfth Night (Or What You Will) is a great play to watch Shakespeare’s work come to life. All of the characters seem to have jumped right out of the pages and onto the stage with no extra flourishes, add-ons or anything taken out of the characters. Director Stephanie Shine stayed true to each character, enhancing certain characteristics within the role to better display the type of person Shakespeare imagined his characters to be. Twelfth Night is full of confusing love triangles, complicated plans and misleading identities; it’s a story too complicated to forget and a play that will only pique your interest until the very last act. 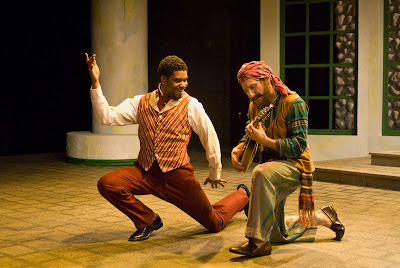 José A. Rufino as Duke Orsino and Chris Ensweiler as Feste in Twelfth Night at Seattle Shakespeare Company. Photo by Erik Stuhaug.

Twelfth Night was written by William Shakespeare and first published in 1623. The story takes place in mythical Illyria, a kingdom that is home to Duke Orsino and Lady Olivia. The audience first becomes acquainted with a woman named Viola who is believed to have lost her twin brother in a storm. Viola, who stumbles upon Illyria, needs to find work and decides to work for Duke Orsino, but disguises herself as a man named Cesario. Orsino is madly in love with Olivia and one of Cesario’s tasks is to deliver love messages from Orsino to Olivia. While completing the task, Olivia falls for Cesario, but is really Viola. But Viola has fallen in love with her master, Orsino, but remember…she’s really a woman dressed up as a man. And don’t forget about Orsino, who is still in love with Olivia. Confused yet?

As complicated as the storyline seems, the director and the actors do a great job in making the storyline simple and easy-to-follow. There are just so many characters involved in the love triangle and the confusion only heightens when we involve Viola’s not-actually-dead twin, Sebastian, a butler, a maid, and a drunken uncle. The story moves fast, as it was naturally written by Shakespeare, but it’s not hard to catch up if you missed anything. Each actor captures the essence of their characters perfectly. Suzanna Milonzi (Viola/Cesario) plays a convincing male and she manages to sweep a woman off her feet; you can feel your heart ache as José Rufino (Duke Orsino) never manages to get the girl he wants until the very end, and Chris Ensweiler plays a lovingly enchanting, yet still mischievous fool. Twelfth Night is the perfect sort of entertainment you and your friends may seek on a cold, wintery night. What else could be better than love triangles and a little bit of mischief just to complicated things even more? Exactly: nothing else could be better.

Twelfth Night (Or What You Will) runs through December 27th
More info and show times at seattleshakespeare.org