Post #3: Kelly Sullivan is seriously awesome
(Wait! What is this? Skip to the end for an explanation.)

I’m not a person to lose my words. I always have something to say—flippant, sarcastic, serious, or profound. I’m not queen of comebacks, but words always find their way to my tongue in time.

But this time, I don’t know what to say. This gift of a Glimmer solo from Kelly Sullivan was intense—like someone had taken the lid off my brain and was peering inside. If I step back from the whole thing and just think about it for a bit, I have to admit it’s not a normal thing—having your own dancer choreograph a solo just for you about you, like a viewport into your being from someone else’s eyes. My parents totally didn’t understand the concept, actually, and still don’t. There’s a lot of material here to talk about the relevancy of art, and how Glimmer is bringing art down to an intensely personal level—this one to one solo business. 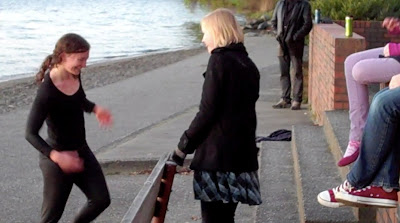 Anna greets Kelly as she comes out of Lake Washington, post-dance

I don’t particularly want to talk about the deeper meaning behind the entire project, though. I wish I could express in plain and simple words the incredible way Kelly understood me through her dance; the moments where I could see myself and the moments I could see her interpretation of me. It was a seamless blending of my answers to the questions (really, very little to go on for an entire dance) and Kelly herself—because she chose the elements of me to emphasize.

Watch the video of Kelly's dance for Anna

There are so many things that are now imprinted with this solo in my mind—like my favorite piece of classical music, Tzigane. It’s a gypsy-ish soloistic crazy violin piece, and although I’ve never thought of it that way before, beautiful to dance to. I’m never going to forget Kelly rowing to the dock during the beginning notes, harsh and fiery for the early morning twilight; her pose, held to stretching point, during the middle orchestral section, and the unforgettable jump into Lake Washington on the final notes. There could not have been a more perfect morning for dancing right before the sunrise—everything was clear and beautiful. I don’t think you can know how much you love Seattle until you’ve seen sunrise on Lake Washington. And yes—Kelly was dancing on a floating dock out on the lake. Not what I was expecting at all, but perfectly staged. The predawn light silhouetted her against the water from where I sat on a cold stone wall. And yes, I know that sounds pretentiously poetic. But the whole thing was—very poetic, at least. I am extremely grateful to have been given the chance to participate in the Glimmer project; it was like nothing I’ve ever felt before, being so involved in a performance when I wasn’t performing. Kelly Sullivan is seriously awesome. And so is Glimmer.
A Glimmer of Hope or Skin or Light is an innovative, interactive new work from Seattle Magazine's 2007 Dance Artist of the Year, KT Niehoff and her company, Lingo Dance. 30 people, including two members of the Teen Tix reviewer corps, Anna B and Mykaila O, have been chosen to receive a custom made solo from one of the Glimmer cast. They have all filled out a questionnaire designed to find out who they are: driver or passenger? sweet or savory? what items are currently in your pocket? what is the last thing you lost? what is a Seattle location you love? Glimmer cast members are using the answers to tailor-make a performance for each person to watch. The dances are personal but performed in public locations throughout the city, available for any and all to see. See dancer Bianca Cabrera's dance for Mykaila at 6:15 PM Tuesday, March 23rd at the Greenlake skate park. Read other recipients' journals on the Glimmer Blog.

Read the rest of Anna and Mykaila's Glimmer journals here.
Find out more about Lingo Dance Theater at lingodance.com
The culminating performances of A Glimmer of Hope or Skin or Light run April 22nd - May 15th at ACT Theatre.