Spencer T. on the "Dark Side of Oz" phenomenon 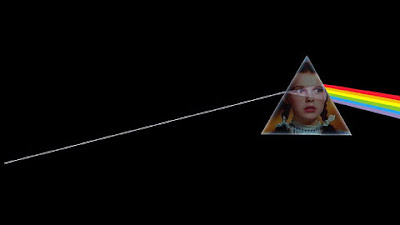 Drugs inspire you to do weird things. Just ask Pink Floyd. Their 1973 rock classic, The Dark Side of the Moon, is rumored to have been created to sync with the visuals from a classic of a different vein: The Wizard of Oz, starring Judy Garland. It is unknown where this story came from, but since the theory took off in the 90s, the internet has been inundated with lists of hundreds of instances where the music synchronizes the movie. People theorize the album is a tribute to Garland among other things. The album is played approximately 2 1/2 times during the course of the film and contains such moments as Dorothy being chased by the tornado only to have the song comfort her, singing, “Don’t be afraid!”. Then, when she steps into brilliant technicolor, the first cash register from the song “Money” rings. Later, the Cowardly lion appears to be dancing perfectly in tune to the soundtrack. For a (much) longer list, check out this website: http://thepinksync.tripod.com/ The evidence may sound a little underwhelming, and so the big question remains: is the so-called “Dark Side of Oz” real or a hoax?

Vocab word of the day: apophenia
Definition: The brain’s tendency to attempt to recognize patterns in chaos; to create order where there is none.

Pink Floyd has repeatedly denied any intention on the part of the band to create this “alternate soundtrack”, leading most people to believe the similarities are just happenstance. But hey, even if it wasn’t intentional, why can’t we enjoy a good coincidence?

Judge for yourself. “The Dark Side of Oz” is playing at SIFF Cinema Friday, December 18, at 7:30