Review of Equivocation at Seattle Repertory Theatre by Lauren W

Speculative Shakespeare—it is beginning to become a genre unto itself. Bill Cain’s Equivocation is a curious addition to the fictional Bard canon, because it confronts the very fact that allows it to exist. “You will be the only major writer with no history,” the villain Robert Cecil prophesies to Shagspeare (Cain’s name for the character). Cecil accuses Shakespeare of being a chronic pleaser, incapable of boldness in life or art. “People will go to your plays as they go to church, leaving unchanged but feeling somehow improved.” Cecil’s indictment of Shagspeare is just as biting for the audience as it is for the character. Are we all too happy that our favorite writer has no troublesome affiliations, and we can read into his works whatever we see fit? 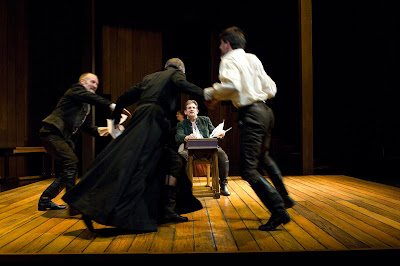 Equivocation is the story of Shagspeare’s relationship with the English government (and thereby the relationship of art to politics). He has been commissioned by the King to write a play about the gunpowder plot of 1605. When it becomes clear that Shagspeare is being asked to write propaganda, he recoils: “I am a writer, not a town crier.” But soon, it is not just a question of to write or not to write— it is a matter of truth and justice, with Shagspeare’s writing caught in the moral crossfire. Perhaps Shakespeare was not a revolutionary; Cain’s script proposes that he ought to have been. The play self-consciously examines the purpose of a play, forcing its audience to keep up and think twice about its reactions.

This show is imported from the renowned Oregon Shakespeare Festival, and it shows; the production values are impeccable. The set, formed with sturdy, elegant wood panels, gives the impression of the theatre in the round, but is used for everything from a castle to a dungeon. The sound and light designs are subtle and effective. Best of all is the superb acting talent represented. Notable is John Tufts’ vigorous performance in multiple roles. He imbues young actor Sharpe with a kinetic petulance, writhes passionately as prisoner Tom Winter, and nails King James’ Scottish brogue and giddy demeanor—sometimes playing more than one in the space of a scene. Anthony Heald shows the full arc of Shagspeare’s journey here—this is clearly a role he has lived in. The part of Judith, Shagspeare’s daughter, is small but deftly written, and Christine Albright’s cynical charisma brings a sparkling female presence to the production. All the actors move with a well-timed rhythm, surely the result of adept direction.

But all this brilliant execution comes to nothing without a quality script to execute. Equivocation is a knotty play—it’s often too clever for its own good, chockfull of semiprofound one-liners and winking self-references It juggles a few too many themes—is it about activism? Grief? Art? Truth? And its moral, when made overt, can become overbearing. All this aside, Equivocation is a stunningly thoughtful play. It boldly holds its audience accountable for its response. It stands and says: Listen up. Art matters, because life matters. Equivocation is the manipulation of words to convey a particular meaning. For Cain, it is “to answer the question really asked, and to answer it with our lives.” Cain’s provocative script, performed by Ashland’s riveting actors, makes for one night at the theatre you are not permitted to forget.
- Lauren W
November 18th, 2009