A certain little most famous artist ever has been getting a lot of attention lately, so we thought we would point out that, alongside SAM's current show of Michaelangelo sketches, there is another, bigger, totally different show happening. It's called A Balancing Act and it takes you on a tour through the career of American master-sculptor Alexander Calder. 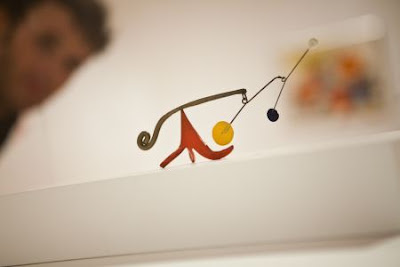 Over at I don't know about this, Stephen Cummings says:

"Alexander Calder: A Balancing Act...(despite its lame title) is top notch...for those who are new to the work, this neutral, retrospective type presentation is the best sort of introduction possible...I was just making a quick stop by the museum to check out some photos, and thought, as long as I was in the building, might as well take a glance upstairs — wasn't until two and a half hours later that I managed to pry myself away from the fourth floor. If you haven't seen the show yet, go sooner rather than later because you'll want to come back again, and again, and again."

You may already know Calder and just not know that you know him. He is the artist who created the big red eagle sculpture (Eagle) in the Olympic Sculpture Park. 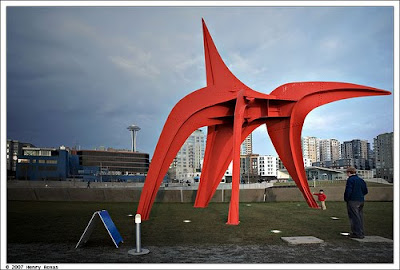 This show, however, focuses on Calder's mobiles, the works for which he was most famous. Jen Graves describes her favorite: 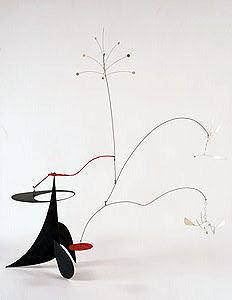 "Bougainvillier (Bougainvillea), from 1947, an exquisitely delicate standing mobile with a generous, curved black base ringed by a black sphere stretching up to a red cantilever that sprouts leggy branches and tiny white blossoms. It's like a garden nymph from outer space."

And over at Another Bouncing Ball, Regina Hackett boils it down for you: "Alexander Calder: A Balancing Act at the Seattle Art Museum is nothing but extraordinary." (Regina's also got a bunch more pretty pictures of the exhibit on her blog - if you're not convinced yet, check it out.)