Review of Coppélia at Pacific Northwest Ballet by Olivia M. 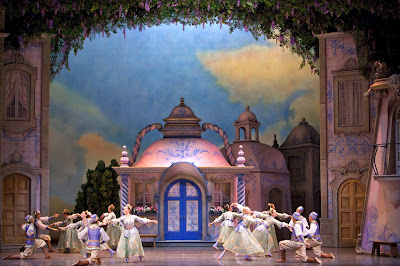 Photo © Angela Sterling
Before Pretty Woman, The Wedding Planner, No Strings Attached and the other 97 predictable movies found on IMBD’s 100 Best Romantic Comedies, there was Coppélia. Composed in 1870 by Léo Delibes, this ballet is the classic boy-meets-girl,-boy-falls-in-love-with-girl,-girl-turns-out-to-be-automaton,-toymaker-gives-boy-drug-wine-to-harness-boy’s-life-force-to-turn-automaton-into-a-real-girl,-boy’s-real-life-girlfriend-tricks-toymaker-and-they-all-live-happily-ever-after. That’s the basic gist of the story, but Franz, played by Jonathan Porretta and Swanilda, (yes, that’s a name) portrayed by Kaori Nakamura, make the performance something special. They are like graceful, attractive mimes, who I don’t want to get stuck in invisible boxes. All of the other soloists, principal and ensemble dancers are equally as impressive, and all of the dances are left me in awe. 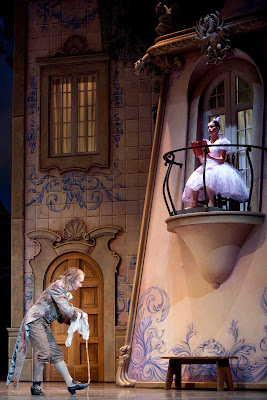 
• In the third act, 24 “baby ballerinas” prance adorably. To quote a friend: “That one’s so little!” Too cute.

• All of the costumes are beautiful, and were designed by Roberta Guidi di Bagno. I am trying in vain to connect with her to design my prom dress because they are so whimsical and pretty.

• Same goes for the set! It was hard to choose between looking at the dancers and the stage design because of how eye pleasing both were.

• Apparently, like most ballets, the third act is somewhat nonsensical, but really enjoyable. All of the story occurs during the first two acts, and the third is a free-for-all. It seems to go on forever, as multitudes of different dances merge into one continuous number, but I probably could’ve watched it for about 75% of forever.

• If you ever wanted to see a Herculean gluteus maximus, look no further than Franz. Joke all you want about dancers being wimpy, with such sheer strength they could probably beat anyone in a fight. Especially if twirling continuously is part of said fight. 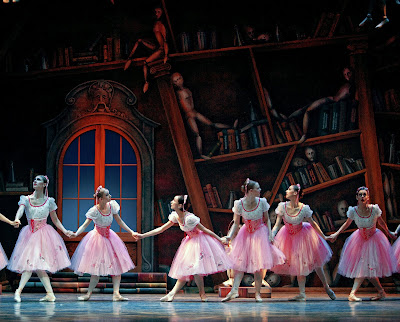 Photo © Angela Sterling
I had never seen any ballets before and before I saw Coppélia, I would’ve said things like “stuffy, long, boring, fancy-pants.” Two of those things did turn out to be true, but in the best way possible. In no way is Coppélia boring or stuffy, but instead funny, charming and endearing. McCaw Hall certainly has that “fancy-pants” atmosphere, and it’s nice get away from the slobs at school and bask in the class. Stick out your pinky, pine for an alternate universe where you know how to dance, laugh at a ballerina doing the robot, and embrace the whole evening.
Coppélia
Pacific Northwest Ballet
Through June 10