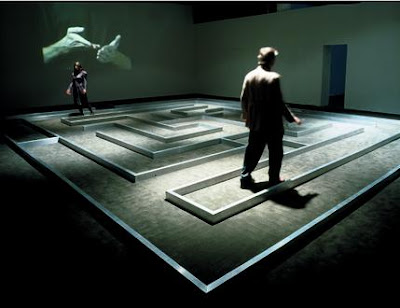 Gary Hill. Withershins [installation view at Institute of Contemporary Art, Philadelphia, Pennsylvania, 1996].
There are two things I’m certain I’ll always enjoy: free stuff and that exhilarating sense of uneasiness one gets from scary movies, and glossodelic attractors by Gary Hill provides both. The first is in the form of old school, paper 3D glasses to view a piece about LSD on three screens, where a pony-tailed Hill speaks in backwards gibberish, or maybe a new language. Twenty minutes later I still didn’t know which it was, but before leaving I went back for more, as I did with each of the other pieces. They are all delightfully confusing. I don’t know what Hill is trying to say, but I know I wanted to figure it out.

Hill uses what appears to the common technology “noob”, yours truly, to be high-tech equipment, combining eight individual works into one tribute of an exhibition. These range from an interactive space which secretly takes a very pixelated picture of you which is incorporated into the exhibit for a short time, to a dark room filled only with a rotating telescope, projecting light. I could only stay in the latter for a short time, because it was so inexplicably eerie. That’s just one example of how Hill’s expressive prowess is something to be explored and absorbed when you go. That’s right, it’s a “when”, not an “if,” and you won’t regret it.

The exhibition rotates thirteen pieces around two anchors: the 3D LSD entertaining gibberish area, and a really interesting interactive maze that senses where you are and plays both audio and video according to the walker’s position. (Tip: have multiple people in the maze at once to have both audio tracks go at the same time. It’s different every trip through based on pace and spacing.) According to kind HAG employee Kristina Bass, self described “security guard/guest concierge,” Gary Hill himself even comes in once and a while to rotate the pieces himself!

It’s convoluted, strange, thought-provoking, and emotion-evoking, and overall just really interesting. There’s so much more than I am allowed room to explain, and I know I’ll be back in the future to maybe catch a glimpse of the man behind the confusing madness that is glossodelic attractors, and keep trying to figure just what the heck is going on.
Gary Hill: glossodelic attractors
Henry Art Gallery
Through September 16
Henry Art Gallery Hours:
11-4: Wed
11-9: Thu, Fri
11-4: Sat, Sun
Closed: Mon, Tue
REMEMBER: Teen Tix members always get in FREE at Henry Art Gallery, and you can ALWAYS bring a guest for $5!