Some things are like aged cheese, or Lady GaGa: they get better with time. Speech & Debate, currently running at Seattle Repertory Theatre, is just such a phenomenon. The goal: to relate to teenagers. Method: everything young, i.e. carpe diem + ROFL - adult supervision x “like, whatever”. Playwright Steven Karam relies on the effortless wit, honest reaction, and habitual defensiveness found in real, live adolescents. However, real, live adolescents are really and truly seventeen, not just young at heart (sorry Frank Sinatra). Though not over the hill, director Andrea Allen’s cast is not exactly renting a limo for senior prom. For the first half of the play, they fall into the rut of trying too hard to achieve nuanced teenage-dom. Despite their charm and obvious enthusiasm, they compromise some of the script’s resonance by simply being a tad too old. 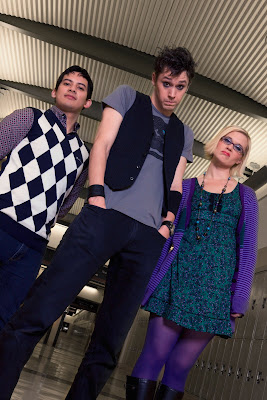 As three high school students trying to out an inter-school sex scandal, Trick Danneker, Justin Huertas, and Erin Stewart are unapologetically candid and sweetly sincere. But they’re also all in their twenties. In a show that centers around the authenticity of young-adulthood, it’s difficult to overlook this fact. Their performances attempt to overcompensate their age by being eager and obvious in the play’s opening moments. Howie (Danneker) is Flamboyant; Solomon (Huertas), Driven ; Diwata (Stewart), Moody. Gradually, as the characters ease into their relationship with each other, the actors shift their focus from Teenage Angst to simply finding a rhythm with each other. The ensuing vulnerability is what truly compels.

Karam unpretentiously captures the many facets of young adulthood, including the often overlooked funkiness as well as the brooding. (Abraham Lincoln + boy scouts + bodysuits x sequins = best). As a teacher and journalist, respectively, Amy Thone poses a relaxed juxtaposition to the little trio, and it is in her company that they build a rapport. As two young gay men, one more accepting than the other, Danneker and Huertas share some lovely moments of banter and argument. Meanwhile, Stewart goes for broke is her comic bits, but finds subtler strengths in her silences. As a piece of theatre Speech & Debate thrives, but does it meet its potential?

Although this production has a young appeal, some of the innate resignation and longing of true adolescents can only be portrayed by those experiencing it. The actors are distanced from this ease because, no matter what your mom tells you, there is a significant difference between eighteen and twenty-five. Moments of Karam’s script are left hollow, or overstated, when they just need to be delivered by a young voice to find purpose. In these cases, a teenage cast would better serve the material. That said, it’s a significant step for a high-ranking theatre to produce work geared towards an under-represented demographic. I for one hope the movement will continue. Like, totes.