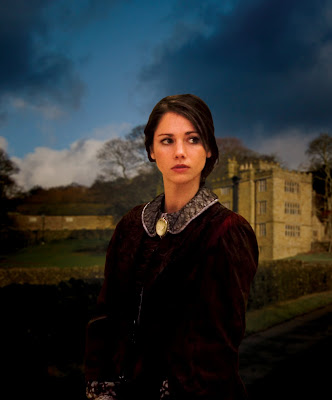 A review of Jane Eyre
at Seattle Musical Theatre
by Jenny B.

The Seattle Musical Theatre presents a remake of the Broadway show Jane Eyre. This timeless story by Charlotte Brontë is seen as nothing short of classic. The musical is a more cheerful mix between Charles Dickens Hard Times and Victor Hugo’s Les Misérables. It has many deep meanings, yet can be seen by a younger audience, making it meaningful for the whole family. Everyone loves a love story, especially one filled with mystery and plot twists.

There are many reasons why Charlotte Brontë’s book is timeless. The musical composed by Paul Goden starts out with a charming orphan girl named Jane Eyre who goes through having less than cheery relatives, and having a childhood friend die. Even though she grew up among strife, her friend taught her that “forgiveness” is the most powerful tool you could use. With this knowledge she grows strong and travels to become a governess. On her adventure she finds complicated love entangled in many secrets.

Every song was beautifully accompanied by Paul Linnes and his five piece band. They really made the music come to life magnificently, whether it is sombre or upbeat. Another impressive aspect of the show was the amazing use of space accomplished by Carl Bronsdon. There were no major set changes, yet it was always clearly defined were each person was. Instead of hiding one bed onstage and having people shuffling around it, or having them pushed on stage, they were all expertly hidden.

The cast was full of wonderful talent, though some needed to be slightly tweaked to perform at their fullest capacity. The leads Danielle Barnum as Jane Eyre and James Padilla as Edward Rochester were both extremely talented singers and had compelling stage chemistry. The only faults were that Danielle’s monologues seemed a tad rushed, and James seemed to lack a focal point, making it hard for the audience to connect.

The audience was full of laughter whenever the housekeeper, played by Balayn Sharlples, surrendered her cheerful renditions that kept the performance upbeat. Her performance was the perfect contrast to the more sombre side of the musical. Another shining member of the cast was the competitive lover Ms. Ingram, played by Jenny Shotwell. Her zooming low and high notes rendered Ingram a perfect rendition of a painted peacock.

The young orphan girls both seem to be budding stars. It was amazing to see such an astounding voice on such a young girl as Olivia Spokiny, whose character Helen dies. Though she did seem to be a bit lively for her death scene, the rest of the time her acting was well performed and accomplished. Also, young Keaton performs her role wonderfully drawing the audience into the story.

The whole cast worked well as a team and played off each other marvellously. The interesting use of the whole cast was well accomplished by the ensemble. They were all accomplished in acting and in voice. Their timing never missed a beat. The singing and most of the performance was consistent and well performed. Though the transitions needed to be more built up or sharper in their execution. Every time there was a change of events it brought you out of the story. Instead of feeling “How could this happen”, it tended to turn into a “Wait, what just happened?” feel. Similarly, other parts of the performance seemed to be less true to the severe nature of the situation intended by the original author.

Overall the theatre was lovely and made you feel very much at home. With a lot of community help in the lobby it had a very comfortable feel. The show is defiantly worth seeing because of its life lessons and the considerable talent in the cast. Though it needed some slight changes over all, Jane Eyre was well performed and made for a truly enjoyable night out.