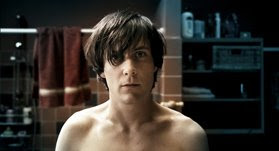 A review of Ben X
a film playing at SIFF Cinema
by Zoe B.


I’m not into video games, the only one I’ve ever enjoyed was Zelda: Twilight Princess, and I only liked it because it was very pretty. So you can imagine how my enthusiasm over Ben X declined as the opening credits began with a World of Warcraft game being played in the background.

Ben is a teenager who plays an online video game to escape from the hell that is his day to day life at school. There are two bullies who torture him without mercy, a cruelty that becomes even more heinous as it becomes obvious that Ben isn’t just awkward, he has Asperger's Syndrome. Now, one of the reasons that I can’t stand video games is that they allow a person to escape, to pretend, when they should be learning how to relate to people. However, with Ben the situation is totally flipped. His only friend is a girl named Scarlite, the healer to his warrior character online. Ben is capable of relating to Scarlite, even though he hasn’t met her (and perhaps because he hasn’t), and she provides more human contact for Ben than desire to escape the constant presence of his well-meaning mother.

The movie has a dark tone, owing to the interviews with Ben’s parents and teachers. The first is with his beaten-down mother who states, “Someone has to die first. Then everyone wakes up.” The interviews hint at the disaster to come without revealing what actually happens. They are hauntingly reminiscent of the interviews given after Columbine and Virginia Tech, so of course the possibility of a massacre lurks.

What actually happens is much less predictable, though arguably much less realistic. Ben meets up with Scarlite, who inspires him to change his life, to take revenge. Despite the potentially diabolic plans this friendship may inspire, and the unreal ease with which they interact given Ben’s condition, it is completely charming.

Ben X, playing at SIFF Cinema February 27th at 7:30 PM, kept me interested, especially the director’s use of Ben as an unreliable narrator – we are never quite sure what is real and what Ben is imagining. The audience is kept guessing the whole way through, a rarity in the cookie-cutter movies we are typically exposed to.